Veteran musician still playing the piano every Sunday in Manchester 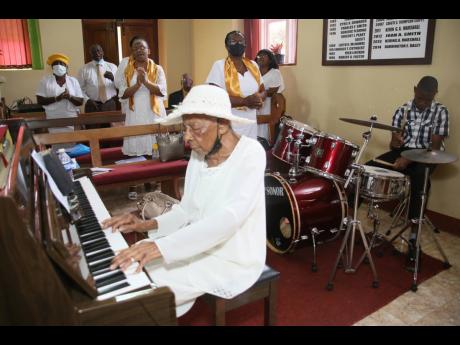 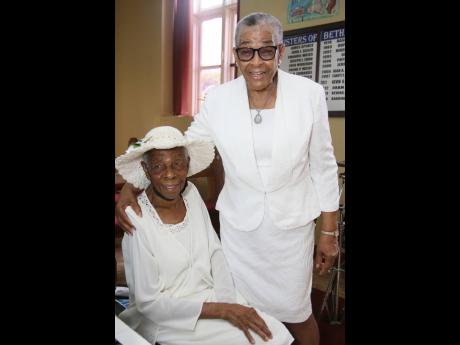 It is less than three months away from her 100th birthday and Dorothy Sconce is as full of life as they come, hardly ever missing a beat as she electrifies Bethabara Moravian Church every Sunday with sounds from the piano she has been playing for decades.

Born in Westmoreland and raised in St James, Sconce found herself travelling across Jamaica in the 1940s when she began working for the postal service after completing secondary education.

Her role as a postmistress took her to Stewart Town in Trelawny, Clarendon, and finally to Ellen Street and then Newport in Manchester, where she bought her home, met and married her late husband, Hulit, and transferred from the Baptist faith to the Moravian.

It was at Bethabara Moravian Church that her talent as a gifted pianist was truly utilised, and the piano lessons her mother and grandmother taught her were put on show.

“I used to assist first with the organ, but it had been giving trouble. So they pulled it down and put the piano and I continued playing. I had been playing the piano, training the choir, youth groups, and mainly all the activities for church, women’s group, and all that,” said Sconce, whose late father, Jim Robertson, was a Presbyterian minister.

As more people learnt of her talent, so, too, did the requests for her services increase, and Sconce was no longer just the church organist but a well-sought-after pianist for the parish.

From graduation exercises at Bethabara Infant and All-Age schools to weddings, funerals, and concerts too numerous to count, across denominations and across the length and breadth of Manchester, Sconce was booked, busy, and loving it.

The only regret, she said, was not establishing a music school after retiring from the post office to impart her knowledge and skill, to ensure she had a group of successors.

Young Dornel Edwards, who plays the drums alongside the 99-year-old at the church, said it has been a good experience learning the art of musicianship under Sconce’s hand.

“I have been playing for six years and it has been great. It has been good working with Ms Sconce because, sometimes when I mess up, she will tell me. She offered me [lessons] on Saturdays to learn to play the piano and I will be doing that,” he said.

Doreen Spence, a member of the elders’ board, church secretary, and former acting principal of Bethabara Primary School, describes Sconce as a treasure.

“Ninety-nine years is one blessing, but still coming to church every Sunday and still at the piano is another … . That is some faithfulness to her God and some commitment to her church,” Spence said.

“She is an institution.”

Driven by the vibrancy of young people and the healing nature of music, Sconce admitted that she would much rather spend her days free-spiritedly, but her family remains cautious, keeping her at home most days to ensure her safety amid the coronavirus pandemic.

“I feel I’m in a prison,” Sconce, the only child for her late parents and mother to six children, which includes a pair of twins, grandmother to 10 and great grandmother to one, said laughing.

These days, Sconce spends her days with her eldest child Wayde, who is grateful for a mother he said fed, schooled, and kept the family going, and who now accompanies him on special holiday trips around the island.

“I wasn’t such a brilliant fellow, but she was patient. I grew up with her mother because sometimes she had to be away, but I was always so happy when she returned,” Wayde said.

“I used to take piano and violin lessons but wasn’t so good with music, but I tried … . I didn’t know my mother would live to see almost 100 years, but I hope she lives to see many more years and hope she keeps up.”

Having travelled to England, Canada, and several states in the US, and given much to community and church, Sconce said she had no idea she would have outlived her relatives.

“It is surprising. I never knew that number could come. I had to look on my age paper at times. And, if anybody say, ‘You look good’, hear me nuh: ‘Look good? I am moving, but I am not myself’,” Sconce quipped, hinting at the downside of ageing.

She is a bit peeved that she no longer has the independence to do as she pleases without the watchful eye of family, but still does some tasks such as cooking her dinner and baking.

She is the longest-living person in her family group, she said, having passed a now-deceased aunt who died when she was 90.

Sconce, who now plays by ear, said she will continue to offer her musical talent to her church, playing her favourite song, The Lord’s My Shepherd, and seeking to fulfil her dream of passing the baton for the piano to a potential successor.