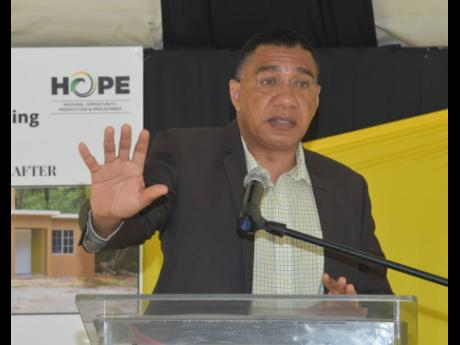 PRIME MINISTER Andrew Holness has spurned the Opposition’s latest call for a rollback of the gas tax amid what it dubbed a worsening cost-of-living crisis, noting that this would affect revenue targets.

“The Government considered very carefully all the implications around the increases in prices of fuel, and we considered the impact on households, transportation, and electricity. The Government also has to consider the fiscal stability of the country, all the demands that are being made on our Budget, and certainly we have had two years of responding to the COVID-19 pandemic which basically redirected significant resources,” said Holness on Friday following the handover of two houses built under the Government’s New Social Housing Programme in the neighbouring communities of Latium and Lottery in St James.

Earlier this week, Opposition Leader Mark Golding led scores of supporters to the headquarters of the Ministry of Finance to demand a rollback of the petrol tax, insisting that the limit should be placed at US$67.50 per barrel.

“The Opposition is free to talk and make suggestions, and if the suggestions make sense, we will look at them. We have been studying it, and for every reduction in taxation, there is a cost that is going to be borne by somebody else in society,” Holness added.

“The challenge that I am having is that the discourse is going on as if Government has unlimited options and that all options are free of consequences. I have seen that the Opposition themselves have not been able to come with a proposal other than just a suggestion, without actually looking at what the real numbers would be,” said the prime minister.

He pointed to the We CARE Energy Co-Pay programme, under which some 458,000 households consuming up to 200 kilowatt-hours of electricity per month will benefit from a 20 per cent contribution to their bills by the Government over a four-month period.

Holness said that the initiative is now being rolled out.

“We have put forward a plan which is starting to come into effect with assisting the most vulnerable and needy with electricity. I think not much is said about it, but it is starting to be effective now, and I happen to know that people are very grateful for the support and they do understand the constraints of Government and appreciate what the Government has done,” said Holness.

“What we are trying to do is ensure stability in the country and to maintain our fiscal arrangements that have served us very well and that have paid the dividends, which have allowed us to respond to shocks,” Holness continued.

“We cannot go back to the days of just being profligate and acting without considering all the factors in a decision,” Holness added.