Backlash from businesses as Gov’t to end SOE 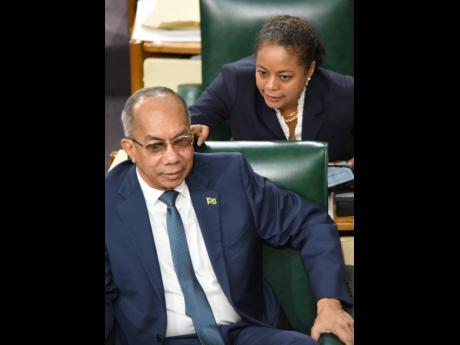 Ian Allen/Photographer
Minister of Legal and Constitutional Affairs Marlene Malahoo Forte leans in to make a sotto voce remark to National Security Minister Dr Horace Chang minutes before he gave an update in Parliament Tuesday on the state of emergency in St Catherine.

The business community in St Catherine has criticised the Government’s decision not to seek an extension of the state of emergency (SOE), challenging that the 14-day respite is not enough to repel criminals wreaking havoc in the Old Capital....

The business community in St Catherine has criticised the Government’s decision not to seek an extension of the state of emergency (SOE), challenging that the 14-day respite is not enough to repel criminals wreaking havoc in the Old Capital.

President of the St Catherine Chamber of Commerce, Dennis Robotham, said the murder mayhem which unfolded earlier this month, turning the Spanish Town market district into a ghost town, will continue once the SOE expires.

In a Gleaner interview on Tuesday, the businessman said that he has not seen any clear results from the security measure, which is set to end on Thursday.

“Where are the guns? Have we seen that kind of results from the measure?” he questioned hours after National Security Minister Dr Horace Chang made the announcement in Parliament.

“They probably know things that I don’t know but based on what I understand, it is just festering and this is just a temporary Band-Aid. As soon as the opportunity arises, we will begin to experience madness all over again. We can expect the hoodlums,” Robotham insisted.

He said businesses continue to be affected despite the presence of the security forces, with the majority of operators shuttering well before the usual 6 p.m. cut-off time.

Spanish Town is mainly controlled by the One Order and Clansman gangs, but internecine conflicts have triggered a splintering into smaller, but often more deadly factions fighting for turf and the spoils of extortion.

Despite Robotham’s grim outlook on the security crisis, commanding officer for the St Catherine North Police Division, Senior Superintendent Howard Chambers, said inroads have been made.

He said the police have made several arrests, although he was unable to give a figure.

“As it is now, we are experiencing much better returns in comparison to what we were seeing before. Things are pretty much calm now.

“Since the state of emergency, we picked up a number of persons and some of them have been charged for various crimes committed in the division,” Chambers said.

In making the announcement, Chang said in the 10 days leading up to the SOE declaration, there were 15 homicides. He said since the implementation of the Government’s chief crime-fighting tool, four murders have been recorded.

He said the expected discontinuation of the SOE was buttressed by the assurance of the security forces that they had managed to get things under control.

It came days after the Opposition People’s National Party indicated that it would not support the extension, arguing that revised Emergency Powers Regulations tabled last week still breached constitutional provisions.

The Government would have needed the support of at least one opposition senator to maintain the security crackdown.

On Tuesday, Opposition Leader Mark Golding told the House that the security forces needed a constitutional piece of legislation for more targeted operations.

“We do not accept the use of a net-fishing approach in relation to people’s rights when what is really needed is a spearfishing approach,” he said, adding that the Opposition anticipates that the security forces will remain on the ground after the SOE lapses.

The Opposition has repeatedly asserted that heavy deployment of security forces is pivotal to reclaiming ground from gangsters.

Describing as sensible the Government’s decision not to seek an extension, Golding said the Holness administration should impose zones of special operations in troubled St Catherine communities and table in Parliament promised legislation to target known violence producers.

When the SOE was declared on June 17, St Catherine had recorded 128 murders, which represented a 30 per cent increase year-on-year.

Up to June 26, murders stood at 133, seventeen more than for the corresponding period last year.

Chang warned, however, that if the security situation changed dramatically, the Government would advise the nation on the steps it would pursue if an SOE needed to be reactivated.

He said the security forces have pledged to use available tools and strategic deployment to maintain the gains.

Both the Government and Opposition have agreed that changes to the Emergency Powers Regulations are needed, but acknowledged that more time was required to ensure that they were compliant with the Constitution.

“We’ll now continue to review the regulations. We’ll again further examine what has been recommended by the Opposition and seek to come to a set of regulations that can be used where the level of violence increases above the capacity of normal policing,” the minister said.

The Government’s SOE push in St Catherine had been hobbled by questions of constitutionality, which grew more pronounced hours after its declaration. The Constitutional Court ruled later that day that previous Emergency Powers Regulations breached Jamaicans’ rights to liberty and freedom of movement.

The complainant, Roshaine Clarke, was awarded nearly $18 million in damages for violations during his more than 260-day detention in 2018.