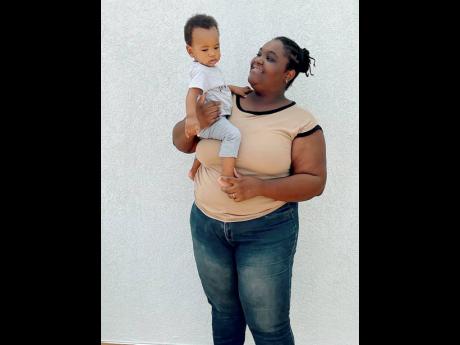 Contributed
Tiffany Ellis and her son Xien are set to be reunited with their family in Britain.

Tiffany Ellis and her 14-month-old son Xien, who was denied a British visa at five months, are booked to depart Jamaica this evening, arriving in London Thursday morning on a Virgin Atlantic flight.

The two will be reunited with Ellis’ five-year-old Britain-born daughter Xianna and Jamaican husband Zarren, who was forced to depart the island without half of his family after his infant son was denied a visa.

Ellis, who has lived in the UK since age eight and has been a resident there for 20 years, gave birth to Xien in Jamaica while awaiting the reopening of the country’s borders after the COVID-19 pandemic which forced the closure of seaports and airports worldwide.

She remained stranded here because there was no way she said she could have left the infant alone in Jamaica. However, on Tuesday, the baby was granted safe passage by the British High Commission in New Kingston shortly after the UK Guardian and Gleaner highlighted their plight.

Zarren Ellis was elated by the news. Zarren said that he was afraid to hope because of previous failed attempts to resolve the impasse.

“We have missed out on so much due to the denial of our son to travel with us. I missed his first steps and words,” he shared.

He added: “I’m not very emotional, but when I heard they are coming, I could not hold back. I cried, and my co-workers hugged and consoled me.

“We have become very dependent on each other because we understood that it is a partnership and we work together to get life sorted. My daughter won’t feel abandoned and can have her mom,” Zarren said.

The mother of two also missed out on her daughter’s first day at school, but on Tuesday her heart was full and all she wanted to do is to get on the next plane home.

“I can’t stop smiling. I’m happy the high commission came through and made it all happen. I can’t wait to hold my family again,” she said of the groundswell of support over the last two days.

“People saw injustice and spoke out against it. That’s what humanity is about.”