Tulloch was devoted to welfare of all, says Patterson 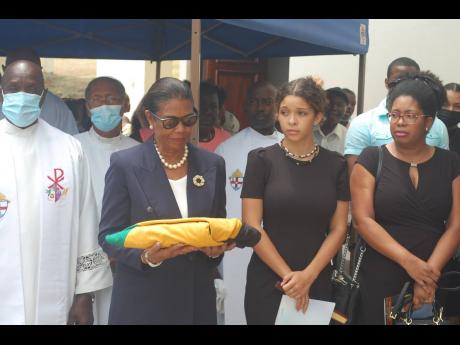 Photo by Janet Silvera
Doreen Tulloch, widow of former Tourism Minister Francis Tulloch, looks at the Jamaican flag presented to her by the police following the official funeral for the retired politician at the Blessed Sacrament Cathedral in Montego Bay, St James, on Thursday. Standing to her left are Tulloch’s granddaughter Emily Whitney and daughter Erica-Leigh Whitney. 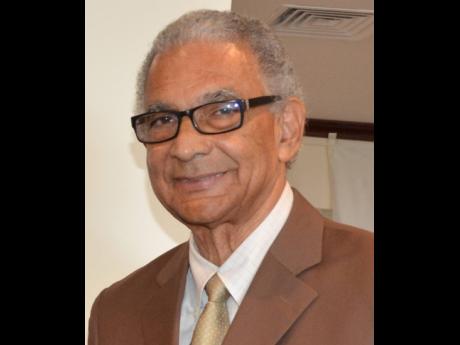 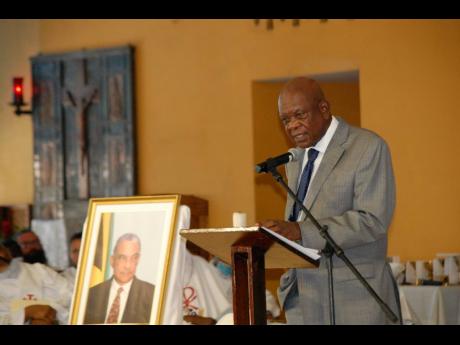 Photo by Janet Silvera
Attorney-at-law Clayton Morgan reflects on the life on his late colleague and mentor, Francis Tulloch, during the thanksgiving service. 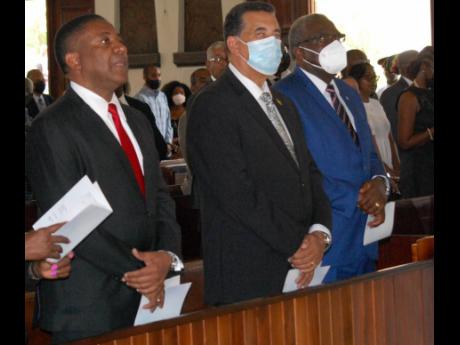 Photo by Janet Silvera
From left: Phillip Paulwell, former chairman of the People’s National Party; Homer Davis, minister of state in the Office of the Prime Minister - West; and St James Custos Bishop Conrad Pitkin at the funeral for Francis Tulloch in Montego Bay, St James, on Thursday.
1
2
3
4

On one hand, he was a very simple, humble, unassuming guy; on the other, former government minister Francis Tulloch was an exceedingly successful lawyer and parliamentarian – a man for all times.

However, in his final years, the man credited for his contribution to the well-being of the poor and downtrodden across Jamaica, especially in the area of housing and social entrepreneurship, became disgusted with the current political system, which he thought was hijacked by the rich to advance their own self-interest.

One of his former mentees and colleagues, attorney-at-law Clayton Morgan, made the revelation during a powerful remembrance of the man who he said never lost the common touch, although he walked with kings, presidents and prime ministers.

Tulloch, who passed on June 23, was eulogised in an official service celebrating his life at the Blessed Sacrament Cathedral in Montego Bay, St James, on Thursday.

Tulloch, who served as a deacon in the Roman Catholic Church, racked up a rich legacy, evidenced by his footprints in several areas of national life.

Housing developments in Catherine Hall, Westgreen and Westgate, today, populous communities in Montego Bay, were built under his stewardship and he played pivotal roles in tourism through his contribution to the Jamaica Union of Travellers Association and JCAL, the two leading transport organisations serving the industry.

The establishment of the Montego Bay Legal Aid Clinic, the Rent Board, the Stamp Office, and the Western Branch of the Supreme Court were feathers in the cap for Tulloch, who was a superstar in the eyes of his constituents.

Although a democratic socialist to the core who could be devastating on the political platform, he was not a radical who saw politics as a means to an end, said Morgan, adding that Tulloch’s brand of socialism was guided by Christian principles which he advanced on behalf of the people.

In a video tribute, former Prime Minister P.J. Patterson supported Morgan’s characterisation of the man who served in his administration as tourism minister.

Patterson said that Jamaica has lost a venerable stalwart and has been deprived of a warrior whose life was devoted to the articulation of the concerns of people – “a man devoted to their representation in the halls of power, regardless of their social status or political affiliation”.

Tulloch proved time and time again that he was no ordinary politician, Patterson said, noting that there was no one else who spanned the wide expanse of electoral geography that Tulloch achieved in his time at the wicket – four constituencies in two parishes.

A younger politician, who would follow Tulloch’s steps in later years, also holding the role of tourism minister, Dr Wykeham McNeill was as complimentary, calling his mentor a legend in the region. He added that Tulloch’s work on the tourism master plan for sustainable development had set him apart from his peers.

Current Tourism Minister Edmund Bartlett, in a message delivered by David Dobson, chief technical director in the Ministry of Tourism, said Tulloch would be remembered for his contribution to the nation.

“He was a true stalwart who played an integral role in tourism,” Bartlett said.

Tulloch has left behind his widow Doreen and children Tony, Gina, David, Andrew, Matthew and Erica.