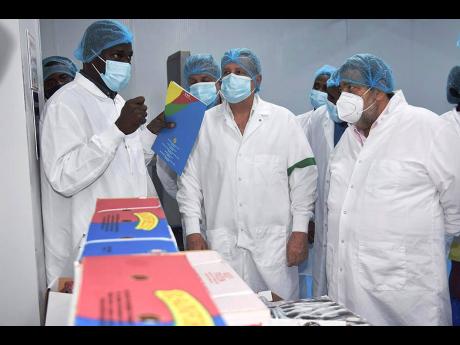 Six months into its foray in the Vincentian market, Rainforest said it has committed to purchasing EC$20 million worth of fish, conch and lobster annually from fisherfolk there.

The company has purchased seafood from 150 local fishers, and paying over EC$3 million, or EC$20,000 per fisherman, the country's Minister of Finance Camillo Gonsalves revealed.

Camillo Gonsalves and his father, Dr Ralph Gonsalves, the prime minister, shared the stage during the official opening of the plant, which features cold storage, blast freezers, processing rooms, and equipment that will allow for at-source retail packaging for the international market.

Excited about the initiative, Dr Gonsalves stated that his country welcomed the injection of capital, as well as technology, marketing, and skill sets. He said further that Rainforest had opened new dimensions for the fishing industry.

“The old colonial economy was based on, among other things, an unlimited supply of unskilled and cheap labour. The production was either subsidised locally or in the marketplace, like bananas and sugar,” said Dr Gonsalves, adding that in the absence of subsidies, diversification was critical.

Since its inception in Montego Freeport 25 years ago, Rainforest, which has operations in St Lucia, Belize, and Barbados, has backed its expansion in the region by its promise of sustainable and environmentally responsible fishing practices.

“Sustainability is at the core of everything we do, and we will support fishing practices that ensure the longevity of St Vincent and the Grenadines' marine resources,” said Rainforest Caribbean CEO Brian Jardim.

Confident of the partnership's impact on the Vincentian economy, Jardim said the investment will secure the country's place on the world map. That, Jardim said, will position the company as a game-changer with the ability to supply high-quality seafood products to any market across the world.

Rainforest currently exports to 30 countries worldwide, including the USA, France, and China.

The company employs 900 workers across the region.