Cops have eyes on others as police boyfriend Maitland arrested; babymother no longer on radar 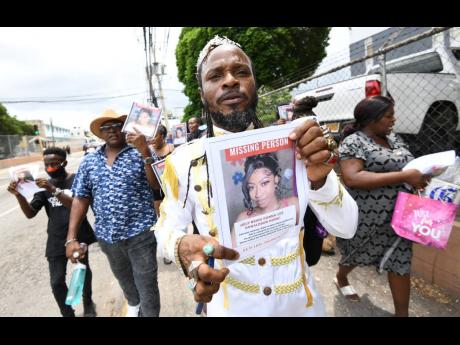 Rudolph Brown/Photographer
Entertainer L.A. Lewis displays a poster with the image of missing social-media influencer Donna-Lee Donaldson during a protest alongside relatives, friends, and supporters on July 24.

“Lines of enquiry have opened up” around several persons of interest beyond the police boyfriend of missing social-media influencer Donna-Lee Donaldson who has been arrested by law enforcers in a dramatic twist in the high-profile case that has...

“Lines of enquiry have opened up” around several persons of interest beyond the police boyfriend of missing social-media influencer Donna-Lee Donaldson who has been arrested by law enforcers in a dramatic twist in the high-profile case that has transfixed Jamaicans.

That development, disclosed to The Gleaner by a senior police source, could be crucial in the coming days as investigators press for further clues more than 24 hours after high-ranking officers and prosecutors reviewed evidence.

Constable Noel Maitland was arrested by detectives from the Counter-Terrorism and Organised Crime Investigation Division Wednesday because certain discoveries from at least three visits to the cop’s Chelsea Manor apartment in New Kingston do not reconcile with his account of Donaldon’s final hours there, the police source said.

It has also been revealed that there was ongoing review of Maitland’s conduct before Donaldson went missing.

Sophia Lugg, who had reported her daughter missing on July 13, alleged that Maitland had picked up Donaldon on the evening of July 11 and that she has not been seen since.

Investigators are still reviewing the more than 20 hours of surveillance footage.

But attorney-at-law Christopher Townsend, who represents Maitland, said he is in the dark about the evidence that the police report they now have linking his client to the woman’s disappearance.

“The police are keeping that close to their chest,” Townsend told The Gleaner Wednesday.

Townsend said that it was not unusual for the police to arrest a person for questioning. However, he said that the quality of the evidence will soon be weighed to judge its value.

According to Townsend, what the police reportedly have is information that may point to suspicions about his client.

Donaldson’s disappearance has sparked national attention, with growing calls from her family and friends to expedite the investigation. That groundswell of people power has attracted a hodgepodge of backers, ranging from social-media personalities to members of the People’s National Party Women’s Movement. Critics have suggested it has turned into a media circus.

In the aftermath of her disappearance, Maitland and the mother of his child, District Constable Kathy-Ann Smith, came under increased scrutiny, but the police, in a statement issued Wednesday, said there was no evidence linking Smith to the disappearance.

Smith’s lawyer, Oswest Senior-Smith, said he was not surprised that the police have not found any evidence but is cautiously waiting to see how the matter unfolds

“I know there is a degree of clamouring out there and that pressure is being brought to bear, so I wait with bated breath to see what it is that the JCF will do, all things considered,” he said.

Senior-Smith said that his client remains off front-line duty and is trying to preserve her safety and to stay out of the public’s eyes.