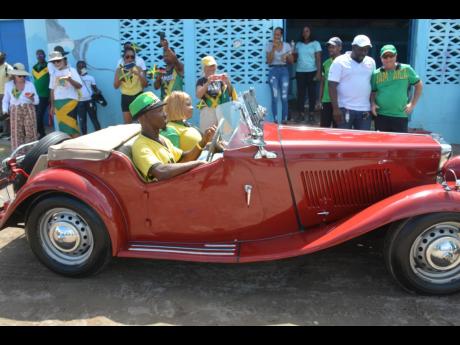 Photo by Janet Silvera
A vintage MG arrives for the Independence Day float parade in Treasure Beach on Saturday. 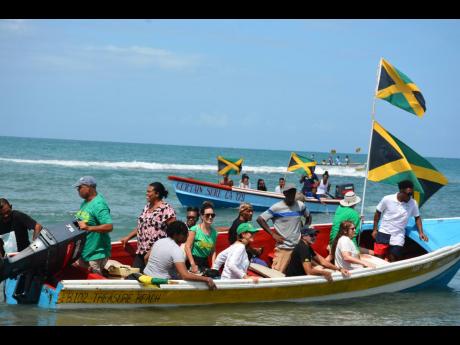 Photo by Janet Silvera
Right: Locals and visitors aboard vessels in the 60-flag boat parade on Independence Day in Treasure Beach, St Elizabeth, on August 6. 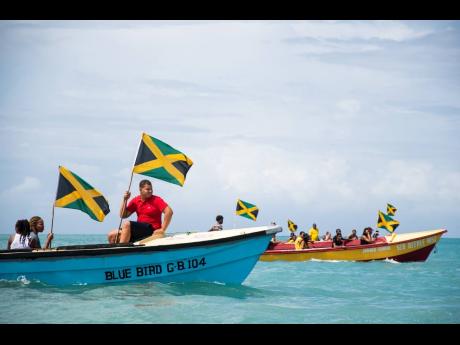 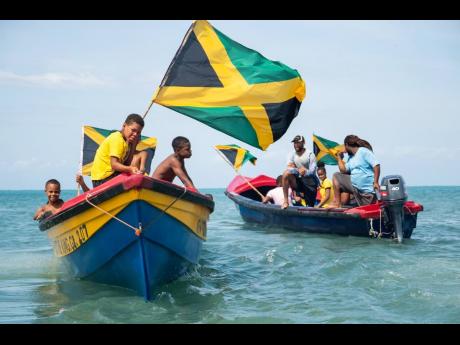 Photo by Janet Silvera
Jamaican flags blow in the wind as the Jamaica 60 boat parade thrilled spectators in Treasure Beach, St Elizabeth, on the weekend.
1
2
3
4

WESTERN BUREAU: Stakeholders in Treasure Beach, St Elizabeth, estimate that the locale made an average of US$2.4 million per day from the Emancipation and Independence celebrations in the island last week with 800 rooms in the area occupied by...

Stakeholders in Treasure Beach, St Elizabeth, estimate that the locale made an average of US$2.4 million per day from the Emancipation and Independence celebrations in the island last week with 800 rooms in the area occupied by tourists and locals over the period.

Restaurants, tour companies, attractions, and excursion operators in the parish also cashed in as patrons soaked in the creative and innovative displays during a non-traditional boat show of 40 vessels carrying 60 flags on Independence Day.

“All of the hotels and villas were full, a lot of the Jamaican diaspora came home for the period and we had members of the House of Lords and Commons playing Twenty20 cricket in the community,” Jason Henzell, area chapter chair for the Jamaica Hotel and Tourist Association (JHTA) south coast, told The Gleaner.

Some of the British parliamentarians also brought their families, filling the Greater Treasure Beach area to capacity.

People also drove from Mandeville, Santa Cruz, and Montego Bay for the Independence festivities, with Henzell disclosing that he has been getting several calls to make the boat parade an annual event.

”All the restaurants did well. The fruit vendors came out and they did well. It had a tremendous economic impact,” he revealed.

Henzell, who operates Jake’s Hotel, Jack Sprat Restaurant and a number of villas in the area, had convinced his long-time friend and Jamaican cricketing great Chris Gayle to lend his support to the Breadbasket Parish’s activities.

Gayle’s team played against the Englishmen, and the cricketer noted that his involvement encouraged some folks to visit Treasure Beach, particularly, a younger group of travellers.

Gayle, who is in his early 40s, said people his age group had flocked to St Elizabeth to have fun and join in the excitement.

“Treasure Beach is my favourite place on the planet to stay and play cricket. And it was an honour to be the guest of honour on our 60th year of Independence,” he commented.

The fisherfolk, who were the toast of the day, felt their involvement was critical to the success of the community, noted 36-year veteran boat operator Dennis Abrahams.

Having had one of his boats on the float, Abrahams pointed out that Treasure Beach could not pay for the kind of recognition that it received over the Independence celebration. He was, however, not surprised by the level of support by people hailing from all over the world.

“Treasure Beach over the years has not boxed itself in. We present some of the most unique ideas. Independence Day was very special. It helped us as fishermen and boat operators to be recognised in a different way. It was not a self-benefit; it was benefit for the entire community,” he told The Gleaner.

“People came from all over to join in the celebration. It was not just this weekend, there are also long-term benefits to be accrued from people saying this community is special, this community has love,” he added, sharing that he got goose pimples participating during the boat parade.

Boat captain Jason Gordon, who has been a fisherman for 20 years, is still in awe.

“The love and the unity of the fishermen coming together was what impacted me the most. Looking at over 40-odd boats, with 60 flags, like a picture painted on the water, plus the natural vibes, was fantastic,” he said.