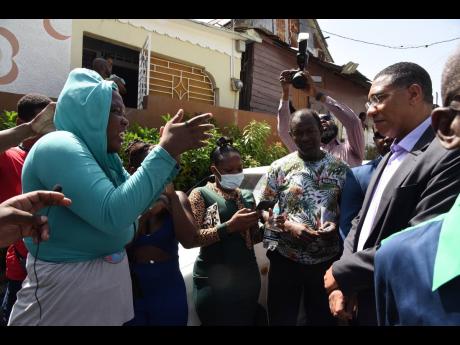 Prime Minister Andrew Holness announced on Tuesday that the Government would review the scope of the zone of special operations (ZOSO) currently in Parade Gardens to include the community of Spoilers on the heels of an alleged firebomb attack.

Holness made the disclosure while standing amid rubble between James Street and Smith Lane during a tour of several burnt-out homes.

“We will take a second look at the ZOSO here to see how best we can expand it given the resources that are here. You will understand, however, that right across Jamaica there are communities in conflict which are calling for the same thing, competing for the same resources,” Holness said.

That consideration is in line with an appeal by People’s National Party caretaker Imani Duncan-Price.

Holness also hinted that planned urban renewal initiatives, including new housing, in the Kingston Central constituency could have a transformative influence on residents’ outlook and their environment.

The prime minister acknowledged residents’ claims that the fire was the act of assailants, but urged them to allow the police to investigate the matter thoroughly.

Paulette Finlayson, one of several residents who spoke to the prime minister, appealed for assistance to find shelter elsewhere. She has lived at the now-razed tenement for 17 years.

Another resident of Smith Lane, Pinky, said she and others are afraid to walk neighbouring streets and is pleading for senior crime fighter, Senior Superintendent Steve McGregor, to be reinstated as head of the Kingston Central police.

The division is currently led by Superintendent Berrisford Williams.

“A long time mi nuh sleep, you know, ‘cause dem say dem a go burn down back the place. Sir McGregor, him nuh laugh wid nobody. Him do him work,” Pinky told the prime minister.

Pinky said further that gang crime had caused her to skip involvement in round robins, income-generating social events in low-income communities.

McGregor, who was on the scene, urged the residents not to resort to vigilante justice.

“I’ve told you all before, if you don’t work with the police, it is going to be very challenging to get to the bottom of it. You have your side of the story, the police also have reports that they get … ,” he said.

Parade Gardens was declared a ZOSO on January 9.