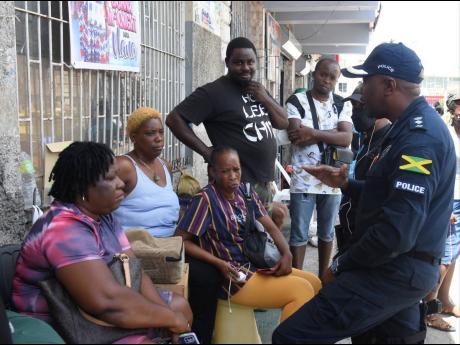 Ashley Anguin/Photographer
Senior Superintendent of Police Vernon Ellis engages in discussion with street vendors at Sam Sharpe Square in Montego Bay as a 14-day crackdown on public disorder got under way in the western city on Monday.

WESTERN BUREAU: A permanent mobile police post, equipped with modern equipment such as cameras, is to hit the streets of downtown Montego Bay within a week as the authorities in the Second City push to restore public order. The high-tech vehicle is...

A permanent mobile police post, equipped with modern equipment such as cameras, is to hit the streets of downtown Montego Bay within a week as the authorities in the Second City push to restore public order.

The high-tech vehicle is expected to play a critical role in the multi-agency initiative dubbed ‘Restoring Paradise a Public Order Reset’.

Speaking with The Gleaner on Monday as the initiative was being launched, Senior Superintendent Vernon Ellis, head of the St James Police Division, pointed out that if left unchecked, a breakdown in public order could stall the growth and development of the parish.

Ellis noted that a similar post was previously located in Sam Sharpe Square, but did not have some of the crime-fighting gear needed to sustain the security efforts.

“We are moving in an age of technology and while we need a lot of aid from technology, we sought the help of our partners and the mobile station is now equipped with cameras, the capability to record to do quite a few things. We’ll be equipping it with other things, too, that will be able to aid the officers while they are on duty.”

The unit will have the capacity for 360-degree surveillance, a holding area for any arrests made, and will operate as a fully functioning police station and a hub for all enforcement agencies.

The Transport Authority will also be bringing its mobile unit into the city to allow persons to sign up for public passenger vehicle plates and access other services.

The mobile unit is one of several initiatives under the latest public-private sector partnership in Montego Bay aimed at restoring order.

Another 14-day effort had been implemented in February, but the successes have fizzled out.

Ellis said that this time around, the agencies on board push will be targeting their respective areas.

The long-standing illegal vending issues are to come into focus with the municipal corporation looking at restructuring vending areas, some of which have more than twice the permitted number of sellers. Vendors in prohibited areas will also be removed and given an opportunity to regularise their trade with the municipality.

Efforts to get a comment from Gerald Lee, secretary-manager at the St James Municipal Corporation, were futile on Monday as he was reportedly locked in a meeting.

The St James Health Services is also part of the initiative, which is being led by Ellis and Superintendent Eron Samuels, who is in charge of operations.

Samuels noted that up to recently, police officers faced challenges in moving through the congested streets of the city to take control of a major unfolding incident.

“So we believe that with this public-order reset, we are able to see and do more about the crime situation,” he said.

Transport Authority Regional Manager Ralston Smith, who spent the day on the streets with his team, expressed confidence that wanton disorder would soon come to an end.