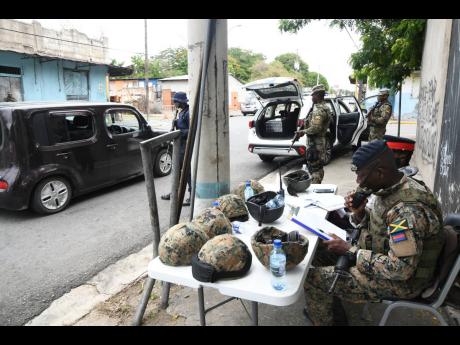 File
Soldiers on alert at a checkpoint along North Street in downtown Kingston after a state of emergency was declared in the Kingston Western and Kingston Central police divisions on Sunday, June 14, 2020.

There has been a 35 per cent plunge in public confidence in states of emergency (SOEs) as an effective crime-fighting tool, a dramatic collapse of faith from three years ago.

Just over half of Jamaicans (or 53 per cent) described the crackdown measure as effective in a July RJRGLEANER Group-commissioned Don Anderson poll. Thirty-nine per cent of respondents disagreed while eight per cent were unsure.

An SOE allows the security forces, or authorised persons, enhanced powers of search and arrest and limits the right of detained persons to due process.

In a March 2019 poll, 81 per cent of Jamaicans – 28 percentage points higher than July’s survey – said SOEs were an effective crime-fighting tool, 13 per cent disagreed, and another five per cent were unsure. One per cent of respondents were unaware.

The slide in support may be cause for concern for the Holness administration that is grappling with a three per cent rise in murders, with 27 more people being killed this year than the 911 up to August 14, 2021.

Executive director of Violence Prevention Alliance, Dr Deanna Ashley, told The Gleaner that SOEs have a place in an overall crime response strategy but must be treated only as a short-term, emergency response.

“Their effectiveness and impact is time bound and has not been shown to have an effect in reducing crime over time. Of concern is the impact of SOEs on the vulnerable in the population, especially the impact on children,” Ashley said.

The measure can only remain in force, initially, for 14 days and must get the support of both Houses of Parliament.

After garnering the votes by government numbers in the Lower House, at least one opposition member must vote with 13 counterpart senators to ratify the bid.

The Opposition People’s National Party (PNP) is against the continued use of the SOEs as a crime-fighting tool - a measure once pitched by Prime Minister Andrew Holness as a strategic response for as long as seven years.

Last November, the initial 14-day SOEs imposed in Westmoreland and six other police divisions across the island elapsed after the Opposition declined to throw its support behind the Government’s push for a three-month extension.

Mediation and intervention specialist Milton Tomlinson said given the levels of crime and violence in the country, Jamaicans will welcome any measures floated by the Government.

“People just want to feel a sense of security going about their daily business. If the Government comes tomorrow morning and says that they are going to bring back hanging, nobody will remember that we have some corrupt police who will just pin something on a man, imprison him, and then get him hanged.

Tomlinson said that Jamaica needs to adopt a whole-of-society approach to fighting crime and violence, including civil society, the Opposition, clergy, academia, and other groups.

“We need to treat crime and violence like an epidemic, just like how we treat COVID-19. We need to look at the causes, how it spreads, and tackle the problem,” Tomlinson said.

He said that within the next 10 to 15 years, Jamaica could experience unprecedented violence.

“There is nothing to deter these criminals anymore. They are not afraid of anything anymore, because they now know how to live. They have learnt how to live and operate in these states of emergency,” Tomlinson told The Gleaner.

“This is a watered-down version of what a state of emergency should be. We are using it as an everyday crime-fighting tool and it means that we are lost.”

The PNP has long maintained that the way in which the Government has been using SOEs since 2018 has violated the Constitution.

In June, the Constitutional Court ruled in favour of a lawsuit brought against the Government by St James taxi man, Roshaine Clarke, over his detention under an SOE declared in the parish in 2018.

He asserted that his rights were breached and the court awarded him approximately $18 million.

Meanwhile, director of research at think tank, the Caribbean Policy Research Institute, Dr Diana Thorburn, said citizens or civilians have no way of assessing the effectiveness of SOEs.

“Even the experts differ on their assessments, in part because there is no consensus on what effective means, but also because there isn’t equitable access to the data necessary to determine effectiveness,” Thorburn told The Gleaner.

She added that the question would have been more useful had Jamaicans been asked: “Do you support the use of SOEs in the fight against crime?”

Fieldwork for Anderson’s poll, assessing 1,113 respondents, was conducted between July 16 and 26. The margin of error was plus or minus three per cent.