Ja urged to get on board tourism train service 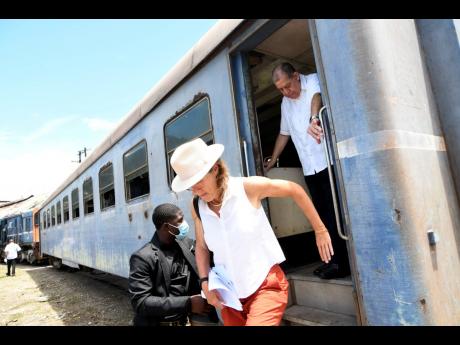 The Canadian envoy said that she was excited about a proposal to establish a museum at the Jamaica Railway Corporation (JRC) headquarters in downtown Kingston.

“There is so much history in Jamaica and you cannot find it,” the high commissioner said on Tuesday, noting that there was a lack of signage to direct tourists to historic sites.

Tudakovic said she would gladly pay to take a train ride from Kingston to Three Miles and then to Culture Yard in Trench Town.

The revival of rail is being mulled by the JRC and interest groups, including a proposal for a tourist stop at the former home of reggae icon Bob Marley.

Patrick Stanigar, chairman of the board of the National Museum of Jamaica, said that his organisation was seeking to partner with the JRC to build a museum at its headquarters.

The chairman said he was confident that funding could be obtained from the Tourism Enhancement Fund and other sources for its establishment.

“Now, the thing to remember, yes, it is a wonderful tourist attraction and Jamaica can make money from it, but it is also a wonderful thing for children,” Stanigar said in a Gleaner interview on Tuesday.

Commenting on a proposal to start a train service for tourists from Montego Bay to visit Appleton Estate in St Elizabeth, the Canadian diplomat believes it would be a magnet for holidaymakers.

“If you say to someone, ‘look, a hundred US dollars and you get to Appleton and you do a tour, people would do that and people do that all over the world. I see sometimes missed opportunities here,” she said.

Minister of Transport and Mining Audley Shaw, who toured the JRC facilities on Tuesday, said that the Government was prepared to enter into a joint-venture agreement to restore the rail service locally.

He said that an investor in the tourism sector had signalled his intention to invest close to US$50 million to restore the rail service from Montego Bay to Appleton as a tourist attraction.

Shaw stressed that his objective was to see a return of the entire rail service in Jamaica.

“It cannot be that we should be the fourth railway company in the world and we have been closed down for 30 years,” said Shaw, describing that status as unacceptable.

General manager of the JRC, Donald Hanson, said that an offer to help rehabilitate the rail service was made by Neil Howard of the United Kingdom (UK).

He said that the JRC was yet to sign an MoU with Howard but noted that the initiative was being pursued.

The JRC general manager said that Howard had pledged to get support from the UK army to assist as volunteers and committed to supplying rails and sleepers - horizontal metal supports.

Hanson said that the school train service, which started on January 10 from Old Harbour to Linstead and Spanish Town, will continue when schools reopen in September.

The JRC transported about 2,000 students a week.

Head of the School of Engineering at the University of Technology (UTech), Oneil Josephs, wants the Government to conduct a feasibility study on the economic viability of rail, starting with the Kingston Metropolitan Region.

Josephs is also suggesting that the restoration of the rail service should be a coordinated effort among all stakeholders.

“There are a number of pieces to the puzzle at the moment, so it needs centrality, it needs coordination. UTech, through the cooperation with the University of Birmingham, wants to bring that knowledge to the table to help with the coordination and studies and implementation of the rail project,” he said in a Gleaner interview.

The two universities signed a memorandum of understanding in April to restore the Kingston railway station and repair some three miles of the railway track.

Josephs said that since the signing of the MoU, both universities have held meetings on research cooperation, training, grant funding application, and upskilling.