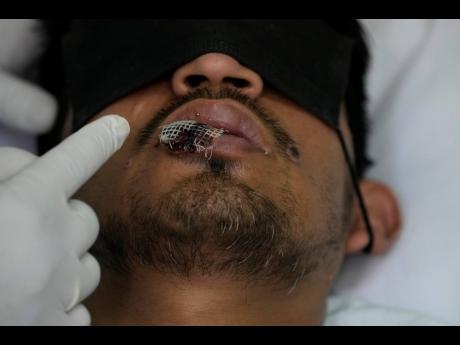 AP
A doctor shows a monkeypox sore on a patient´s lip at the Arzobispo Loayza hospital in Lima, Peru, Tuesday.

As Jamaica’s monkeypox case count inches up weekly, hospitals and other healthcare facilities have bolstered efforts to stem the virus’ spread.

Bent does not foresee discrimination among healthcare staff arising as a major concern. Clarendon recorded two - including the first - of the overall four confirmed cases in Jamaica.

Jamaica recorded its first case on July 5 when a male who entered the country five days earlier from the United Kingdom.

There are three active cases of monkeypox in the island, with one person recovering. Five individuals are in home quarantine and one is hospitalised.

“Like anything, when you have a first case, naturally you wouldn’t be expecting that. I don’t think anybody would want to have a first case, but we would have managed it pretty well [and] we have learned from it,” Bent said in a Gleaner interview on Tuesday.

He said that hospitals under SRHA - which includes St Elizabeth, Manchester, and Clarendon - have boosted surveillance to prevent the recurrence of the July 9 reported escape of an infected patient at May Pen Hospital in Clarendon.

“It’s early to predict the challenges, but what we want is for the general public to adhere to the different protocols ... so that we don’t have to have a situation where the cases have multiplied significantly,” he said.

Although no cases have been recorded in the South Eastern Regional Health Authority, Dr Natalie Whylie, acting regional technical director, said that strategies have already been set in train at hospitals and other healthcare facilities across St Catherine, St Thomas, and Kingston and St Andrew in the event of a suspected or confirmed case.

Bent also indicated that training for staff and healthcare workers in terms of our understanding of the disease and how to manage it were heightened.

“We are really piggybacking on the lessons learned from COVID to manage this latest emerging condition,” Whylie said, adding that she did not foresee insurmountable challenges.

Medical personnel, she said, have not expressed any unease in having to interact with patients with monkeypox.

“They have been sensitised, they have been trained, they understand infection-control protocols, which are similar in a way to what we have been dealing with COVID,” Whylie said.

Health Minister Dr Christopher Tufton also said the medical staff have not raised any concerns about contracting the monkeypox virus from infected persons.

“Staff have been very professional up to this point. Having had the existence of COVID, I don’t think this will be an issue,” Tufton said.

The first local transmission of monkeypox was confirmed by the health ministry on August 5.

Two of the four cases were imported.

Gay and bisexual men have recently been added to the list of vulnerable groups because of the high infection prevalence globally.