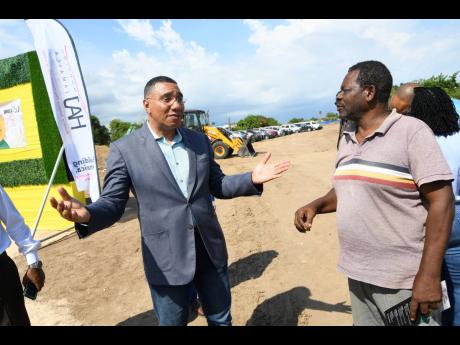 Rudolph Brown/Photographer
Prime Minister Andrew Holness (left) in conversation with Cliffford Drummond, vice-president of the Citizens’ Association of Daytona, at the ground-breaking ceremony for the Sandown Palms development in Portmore, St Catherine, on Friday.

In its drive to make more housing solutions available, the Government is committing to complete all the housing projects which have been lagging on for years without being actualised.

“We have made a commitment that all the projects that have been on the books and have not been executed that this Government is going to get them done,” he said.

Speaking at the ground-breaking ceremony for the Sandown Palms Housing Development in Portmore, St Catherine, yesterday, Prime Minister Andrew Holness admitted that a lot of housing projects in the works for over a decade had been lagging, owing to various different reasons.

“Some of these projects are on the drawing board and we get approval, then we get objections – valid objections sometimes from a member of parliament or a citizen – or it gets involved in a court case, so these projects take quite a bit of time to develop,” he explained.

He cited the Sandown project as one which had failed to get off the ground as initially planned.

“In fact, the project that we have just handed over some units in would have been in the works for 12 years and it’s not that the project has to take this length of time, but there are many stops and starts, and these stops and starts are not always bureaucratic; some of them are financial,” he said referencing the Catherine Estates development.

Holness further pointed out that in some instances, the joint-venture partners were to be blamed.

However, he said that the Government has committed to finishing all of those legacy developments.

“So, the Government is operating on two parallel tracks. Parallel track one: those projects that have been there for how long, gathering dust for how long, can’t make decision on them, can’t finalise them, we are going to get them done.

“And on the second track are the new projects and there are many new projects which we will get done,” Holness said.

The prime minister said that the Government has learned from the challenges which delayed the projects for eight to 12 years and would not be repeating the same mistakes.

The Sandown Palms project is the third residential project slated for St Catherine this year and will be a gated community.

The project, which is being spearheaded by the Housing Agency of Jamaica, will consist of 148 housing units.

NF Barnes Construction Company will be executing the 18-month project, valued at $1.7 billion.

The project is targeting middle-income Jamaican professionals between the ages of 30 and 50.