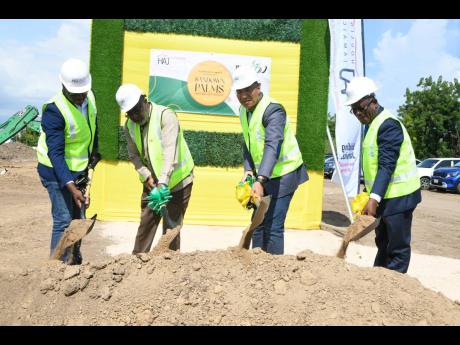 Prime Minister Andrew Holness yesterday said that the Government will be moving to put an end to squatting and the illegal capture of public lands.

While admitting that there are challenges in accessing affordable homes, Holness said that there are persons who are only interested in taking over private and public properties.

“And there are some who are even as audacious to say they don’t own the land, they don’t have any title for the land, but yet they are selling the land,” he said during a handover ceremony for 51 homes at Catherine Estates in Dunbeholden, St Catherine, on Friday.

“They want road; there is no road. They want the Government to put water there, but Government didn’t even know about it, and they want title after spending all this money building on the land,” Holness said, adding that he was aware of a nearby illegal settlement where people were putting up houses 50 times the size of the units in the structured development.

This type of behaviour, he said, is being encouraged, in some instances, by gangs who want to take over and control communities and, in other instances, financed by gains from criminal activities.

“But I want to be very clear that we will not allow you to capture, squat or illegally take over public lands. It will not happen, and we will not allow it in any way shape or form to deprive the people of this country of structured developments because the land that they are taking the same lands that the National Housing Trust and HAJ (Housing Agency of Jamaica) are going to need to build houses like these in structured communities,” he warned.

Meanwhile, Holness maintained that his administration is on track to deliver 70,000 houses over the next five years as promised in 2020.

The prime minister had made the promise during his swearing-in ceremony following the September 2020 general election. He noted then that 30 per cent of the homes would be reserved for police officers, nurses, teachers and civil servants, while 10,000 would be allocated to young people between 18 and 35.

“So, we will reach the 70,000. We were a bit delayed by COVID. It cost us about two years, but nonetheless, we are still going along,” Holness added.

The prime minister said that the HAJ has also committed to delivering 14,000 houses of the targeted number, which includes 51 units in Mona, St Andrew, which have already been completed and sold; 772 units at Edmund Ridge Estate in St James, also completed; 623 units in Hellshire, St Catherine; and 535 units in Grange Pen, St James.

“And in our land bank, we have various other projects which amount to 7,139 which are at various stages of development,” Holness added.

Catherine Estates, one of the largest developments in the parish, is expected to be completed by 2025 and will see the construction of 853 studio units and 799 one-bedroom starter homes.

The starting price for the duplex studio is $6.5 million, while the one-bedroom units have been priced at $7. 2 million

The development, which is a joint-venture partnership with the Government, through the HAJ, and China Harbour Engineering Company, is being done at a cost of $14.7 billion.

Originally, the development was planned in 2012 as a low-income housing project to be carried out by the HAJ in collaboration with the private sector. However, the development experienced some challenges and was stalled for some time before it was revamped.

The development will also have high school and a primary school as well as space for a green area and commercial activities.