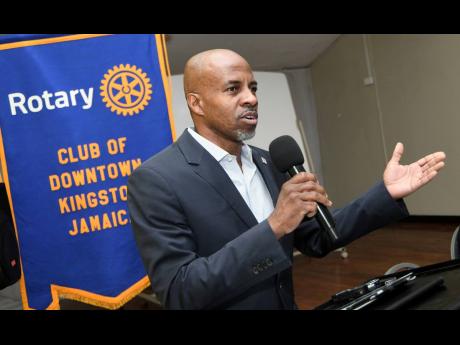 Rudolph Brown/Photographer
Crime Monitoring Oversight Committee Chairman Lloyd Distant speak on building consensus to tackle the level of crime and violence in the society at a Rotary Club of Downtown Kingston luncheon at the Liguanea Club in New Kingston on Wednesday. 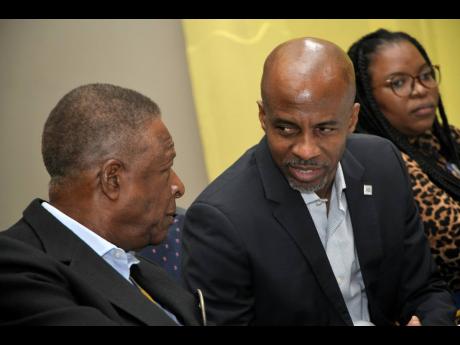 The Crime Monitoring Oversight Committee (CMOC) is pushing for the Government to provide a timeline on when the draft for the Enhanced Security Measures Act will be completed or be tabled.

The proposed law is being touted as a major tool to empower the security forces to disrupt criminal networks, reduce violence, and increase public order.

One of the deliverables identified in the 2020 consensus on crime among the Government, Opposition, and stakeholder groups was that the act would have been drafted by the first quarter of 2021.

Asked about the missed target at a Rotary Club of Downtown Kingston luncheon yesterday, CMOC Chairman Lloyd Distant Jr said: “A timeline has not been given. The word that we have received is that the drafting of the policy is far advanced, but we haven’t seen anything about when they will be finished drafting the policy or when the act will even be tabled.”

When contacted by The Gleaner yesterday, National Security Minister Dr Horace Chang said he could not comment on the matter at the moment.

He, however, said that the legislative process is complex and would require more than an off-the-cuff comment.

In the meantime, Distant, who was the guest speaker at yesterday’s luncheon at Liguanea Club in New Kingston, said that CMOC is moving to deepen the consensus to include short-term targets aimed at reducing crime, with hopes for new broader consensus by October.

“One of the things we are now identifying and the conversations we are having with the minister and the Opposition is, ‘What are those short-term initiatives? What are the things that need to happen?’ And, of course, you are going to hear the state of emergency or the Enhanced Security Measures Act, but whatever those are, we need to rally behind them,” he said.

Added Distant: “We are identifying a more detailed set of activities to measure things that we can hold the Government feet to the fire to deliver things, on and, of course, for the Opposition to support.”

He said that CMOC hopes to re-engage the Opposition by the end of September with the new short-term targets.

“So bringing in the short-term initiatives that we never had before – because it was all medium and long term – is actually rebuilding our consensus, and it is a significant additional component as well as identifying more granular deliverables, key performance indicators, and targets,” he said.

CMOC, he said, has already had a series of consultations with other stakeholder groups, including the Church, the trade unions, and the private sector, and was now meeting with Chang and his team.

However, while pointing out that there was no debate on the existing consensus and agreed deliverables, Distant said that Chang raised concerns the targets being measured by CMOC did not go far enough in accounting for government policies and programmes.

CMOC is an independent committee that comprises non-partisan stakeholders. It was established in 2020 amid a worrying level of crime, especially murders, to help transform the country into a safe, secure, investment-friendly, just, and less-corrupt society.

A new Jamaica Constabulary Force Act and the strengthening of the Proceeds of Crime Act are among the deliverables for late 2022.

Eleven of the 30 targets due to be completed by September 2022 have been satisfactorily achieved. Three have had their timeline reset, while 12 have missed their deadlines without satisfactory justification. A further two are tracking behind and are likely to miss the timeline while four are still on track.