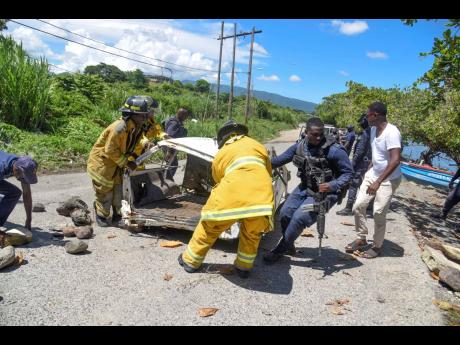 Nicholas Nunes/Photographer
Police and firefighters work to clear a roadblock along the Leith Hall main road in St Thomas on Monday as residents protested the inconvenience and expense the poor surface was causing for them and taxi operators. 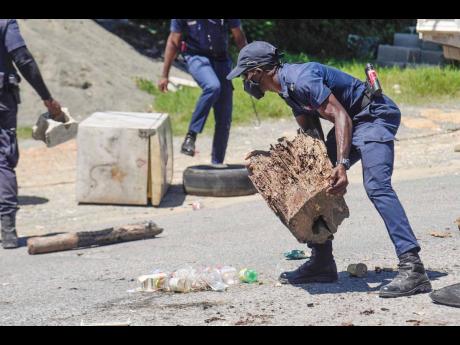 Nicholas Nunes/Photographer
Police officers remove debris from along the Leith Hall main road as residents of St Thomas protested the poor condition of several roads in the parish on Monday. 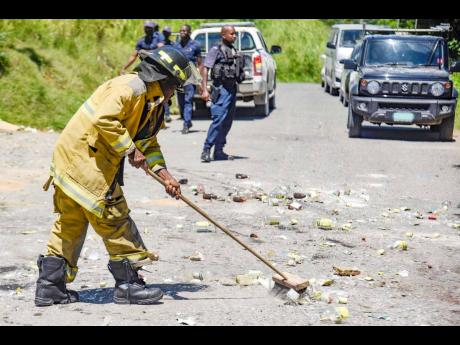 Nicholas Nunes/Photographer
A firefighter clear the Leith Hall main road in St Thomas of broken glass on their way to respond to a fire on Monday.
1
2
3

Protestors in St Thomas have threatened to continue pressing for action if nothing is done to bring immediate relief after mounting a series of roadblocks over bumpy under-construction roads on Monday.

Taxi and bus operators, who also withdrew their services, joined frustrated residents in protest as the numerous roadblocks along the Leith Hall and Lyssons main roads and in other sections of the parish left commuters, including students, stranded.

Commuters travelling to or from Bath, Lyssons, Port Morant and Dalvey and Leith Hall were most affected.

As early as 3 a.m., residents began mounting roadblocks, timed to coincide with the first day of the new school year.

When the Gleaner team visited the parish about 1 p.m., residents were still blocking the roads.

Some were seen scampering on the approach of the police in Leith Hall, even as they defiantly said they would not stop the protest action.

Police and firefighters were kept busy clearing the blockades on their way to respond to a fire that had been lit on the road. However, by the time they arrived, residents had already put out the blaze.

Several commuters were also spotted trekking to Morant Bay in the heat of the sun, while residents huddled in groups along the roadway, voicing their support for the protest.

Some students were also seen walking home from school.

The residents said they are suffering as a result of the road condition, which has worsened since work began on the Southern Coastal Highway Improvement Project. Some claimed they had developed back issues and that the dust was causing respiratory illnesses.

Motorists, including taxi operators, complained that they were unable to keep up with regular maintenance costs for their vehicles.

One resident in Lyssons, who asked to remain anonymous, said that the residents had blocked the roads about two weeks ago, but the contractor asked for three days to address some of the issues. The concerns remain.

“We asked them to scrape off the road, marl it, press the road and oil it to keep down the dust. We not really asking them to [asphalt] it right now,” he said.

“We will continue this operation until the Lord returns for His world,” he warned, noting that they were not willing to endure much more discomfort.

“A whole week of blocking a go happen,” Shawn Brown chimed in.

“You can’t take shoemaker contractor and put pon di road. They need contractors who know how to build roads,” he said in frustration.

Although his three children were affected by the protest, Brown said that he did not mind as the road needs to be addressed.

Three women in Leith Hall also told The Gleaner that they stood in solidarity with the protestors, claiming that their community was among the worst affected.

They said that owing to the state of the road, taxis have refused to carry their children to school, resulting in them missing classes for several days.

Some taxi drivers are even bypassing the community, they said.

“Mi support dem in every way and mi wouldn’t mind dem block it for all a week all when mi can’t get to go to work,” said Carolyn Allen, whose daughter had to miss school yesterday.

Thompson said that she is usually out with her children by 7 a.m., but sometimes up to two hours later, they are still awaiting transportation as taxi operators say “$70 can’t fix dem car, so dem only a carry adults”.

She added: “We a suffer hard, hard. All when you go Morant Bay, dem turn off a Prospect fi bypass the community.”

Another parent, Anieka Edward, said she, too, had similar experiences and that on more than one occasion, she had to tell her son to go back home. He even missed an exam, she told The Gleaner.

The women and other residents said they do not know who to turn to as they do not see their member of parliament, Dr Michelle Charles.

But Eastern St Thomas Taxi Association President Kirk Brown said that Charles met with the operators on Friday and had promised that some work would be done by Monday.

He added that work only started on Sunday night and the residents and operators were not pleased with what had been done.

Calls placed by The Gleaner to Charles’ phone went unanswered and she did not respond to messages.

Brown said that he is expecting normality to return soon in terms of transportation as he did not hear of any planned continuation. He added that while he could not speak for the residents, the taxi operators could not afford to withdraw their services for a week.

In the meantime, checks at some schools in the parish revealed that the protest had marred attendance at the start of the new school year.

It was a similar situation at Morant Bay High, where an administrator reported that while only eighth-graders were to be in attendance, 15 per cent of them failed to show because of transportation issues.