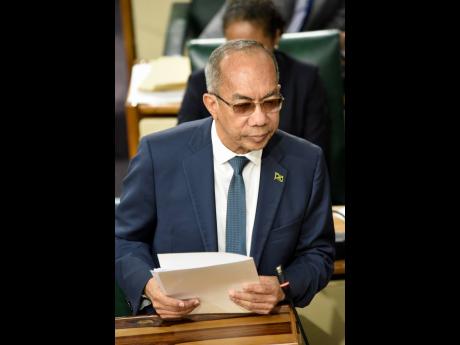 Persons who are implicated in gun crimes will not be allowed to enter into plea-bargain arrangements unless they provide information in relation to other illegal firearms under proposed amendments to the Criminal Justice (Plea Negotiation and Agreement) Act once adjustments are made to the Firearms Act.

National Security Minister Dr Horace Change, while opening the parliamentary debate on the Firearms (Prohibition, Restriction and Regulation) Act 2022 Tuesday, said Section 5 of the act “will provide for the imposition of a lesser sentence only in instances where the accused provides information that might assist the Crown in the prevention, detection, or investigation of, or in proceedings relating to, firearm offences or any other offence”.

“This will encourage offenders to provide critical information to support the State in tackling the proliferation of illicit firearms and other transnational organized criminal activities,” Chang told lawmakers.

He said similar amendments are to be made to the Criminal Justice (Administration) Act, which will prohibit judges from reducing the sentences for persons who have pleaded guilty to a prohibited offence under the Firearm Act.

At the same time, he said a sentencing judge, who believes that the prescribed sentence is manifestly excessive and unjust, may issue a certificate to the offender granting that person permission to seek leave to appeal the sentence in the Court of Appeal.

Under the new proposed amendments, lawmakers also want a fixed-penalty regime for licensed firearm holders who commit an infraction in relation to their permit in a bid to lessen the offences for which licensed firearm offenders will be criminalised.

Infractions such as failure to display licence and contravention of terms and conditions of firearm authorisations are among the proposed breaches for which the fixed penalty would apply.

The minister, while noting that the fixed-penalty regime was a proposed provision, said lawmakers wanted to avoid criminalising the licensed firearm holder on all offences.

Chang said also that under the amendments, a person who assaults, obstructs, hinders or resists, or uses any threatening language to an authorised officer executing any function under this act commits an offence and shall be liable, on summary conviction before a parish court, to a fine not exceeding $1 million or a maximum of one year’s imprisonment.

“Some had gone through the process of not getting their authorisation and, in fact, going various processes and due diligence required to get the authorisation and they made a simple error, but they need to be reminded that the firearm carries a certain responsibility, but that they will be given a fixed penalty charge such as, for example, exposing it unnecessarily in public space,” Chang said.

According to the minister, the proposed amendments intended to stem the tide of criminal violence in the country.

“We know that legislation alone will not reduce the level homicides overnight,” he said.

“We are confident, however, that this piece of legislation presents a strong deterrent to persons who are involved in trafficking, diversion, manufacture, stockpiling, and the movement of firearms, their parts, components, and ammunition … And we will not apologize for that!”