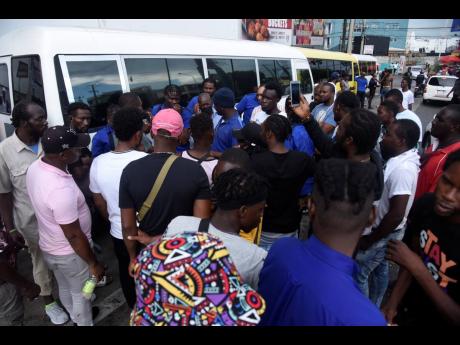 Nicholas Nunes/Photographer
Bus operators who ply the Golden Spring to Half-Way Tree route in St Andrew in discussion on Monday as they withdrew their services, causing chaos for commuters. 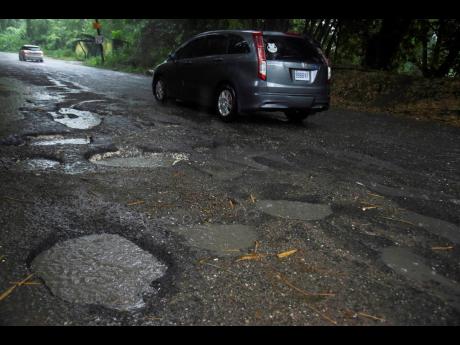 Nicholas Nunes/Photographer
Motorists travel along the bumpy Temple Hall main road in St Andrew on Monday. Public transport operators withdrew their services over poor road conditions and what they deemed to be unfair treatment by cops even as they pressed for an increase in fares.
1
2

Poor road conditions, seized buses and a demand for fare increase have been cited among the reasons for the strike action.

Stony Hill Technical High Principal Eric Smith said that only a quarter of the 537 students on roll were able to attend school.

“It has had a very negative impact. It has affected teachers as well. I still have teachers who have not turned up. I have about 80 per cent of the teaching staff here and a few students are still coming in,” he told The Gleaner shortly after 11 a.m. yesterday.

Smith said the school has a bus involved in the education ministry's rural transportation programme, which would usually take students from Castleton, St Mary, to Stony Hill and back home.

“We weren't quite ready to have that rolled out, but if this strike action goes into a second day, then we will have to get that bus out to assist with those students,” he said, adding that while the bus is reserved for students on the Programme of Advancement Through Health and Education (PATH), all students would be permitted to board the bus in such a crisis.

St Andrew West Rural Member of Parliament Juliet Cuthbert-Flynn said she has been hearing conflicting stories and was unsure of the true cause of the strike.

She noted that it also affected students attending institutions across the Corporate Area as they would have been at bus stops very early in the morning.

Cuthbert-Flynn said that many people returned home when the roadblocks were just mounted, but efforts were made to provide transportation for those who decided to wait.

“We have tried, along with the minister, to make sure that persons are getting to work and that they will be able to get from Half-Way Tree back into Stony Hill and the Lawrence Tavern area,” she said, adding that the JUTC had deployed more buses than normal to service the affected route.

President of the Transport Operators Development Sustainable Services (TODSS), Egeton Newman, told The Gleaner that he gathered that more than a dozen tinted Coaster buses were put on wreckers in Half-Way Tree last week.

Public passenger vehicle buses are allowed to have a 35 per cent grade tint, said Newman, noting that some of the vehicles seized had lower and higher grades.

“The regulations say that if a bus has a higher grade tint than what is required, the police can demand that the operator remove the tint immediately. If the operator doesn't, then Island Traffic Authority will be called in to remove the licence plate, and after that, they would have to get the tint removed and pay a fee to have the plates returned,” Newman said.

But the TODSS president said operators who were willing to remove their tint and even those who had started doing so still had their buses seized, noting that it has cost operators up to $50,000 to have their buses returned – half of that amount for wrecker fees and the remainder for pound fees and tint removal.

Newman charged that “corruption” was afoot as some police officers call in wrecker operators even before an operation had started.

He added that while he was not in support of the operators withdrawing services, he is advocating for better treatment of transport operators by the police.

He said the protest began early as he received a call at 6 a.m. informing him that the JUTC buses were not able to complete their journeys due to blocked roads. Buses terminated in Stony Hill as they could not proceed to Lawrence Tavern and beyond.

“The roadblocks have since been cleared. Primarily the schools in that area, St Mary's College and Oberlin High, would have been impacted as well as persons who were coming into Kingston for school, work or business,” Thoms said.

“I have been hearing that the transport operators are requesting an increase in fare and are also asking that some roadways be fixed. That's as far as I have gathered on the ground so far,” Service said.