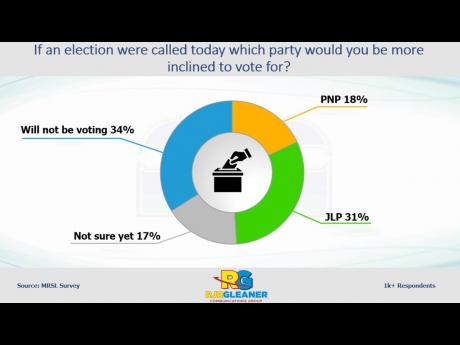 The ruling Jamaica Labour Party (JLP) would retain power if a general election were to be called today, widening its advantage over the Opposition People’s National Party (PNP) and strengthening its influence over key demographic groups, including young voters.

But even among more mature voters 45 and older, once the backbone of political dominance, the PNP has ceded ground to the Labourites.

Amid an increase in voter apathy, the PNP is trailing the Andrew Holness-led JLP by 13 percentage points, losing sway even in its traditional stronghold of Westmoreland that turned green in the electoral tsunami of 2020 that saw the Labourites winning 49 of 63 seats.

An RJRGLEANER-commissioned Don Anderson poll revealed that 31 per cent of electors would mark their ballot for the JLP, while 18 per cent said they would vote for the PNP.

The grim data dovetail with the findings of other Anderson polls showing Opposition Leader Mark Golding and his party behind Holness and the JLP – results that may weigh heavily on the PNP president heading into the party’s 84th Annual Conference this weekend.

Anderson, CEO of Market Research Services Limited, said the JLP has a lead over the PNP despite reduced ratings for the Government and marginally increased rankings for the Opposition.

The pollster said that the PNP’s strongest support is among older people aged 45 to 55, who account for 25 per cent.

“They have been able to maintain that, but by the same token, the gap between themselves and the Jamaica Labour Party among the older voters is four percentage points in favour of the JLP, compared to 13 percentage points overall,” he explained.

Among voters older than 55, the JLP leads the PNP 29 per cent to 24 per cent. Twenty-eight per cent in that cohort said they would not vote while 19 per cent said they were not sure.

Anderson reported that the JLP is attracting far more young voters than the PNP, as 11 per cent of respondents aged 18 to 24 said they would vote for the PNP compared to 32 per cent who are in favour of the JLP.

The poll was conducted between July 16 and July 25 among 1,113 Jamaicans of voting age. The margin of error is plus or minus three per cent.

By parish, the JLP is dominant in St James, Westmoreland, Manchester, and St Mary, and is strong in St Ann and St Thomas.

On the other hand, the PNP took the lead in St Elizabeth and is competitive in Kingston and St Andrew, Hanover, Trelawny, Portland, Clarendon, and St Catherine.

Though more Jamaicans are in favour of the JLP rather than the PNP, 34 per cent of respondents said they would not vote – an increase of three percentage points in the last year.

Fewer Jamaicans said they were not sure who to vote for – a decline from 26 per cent last year to 17 per cent in the latest poll.

Anderson said that voter apathy is highest among Jamaicans aged 18 to 24, with 40 per cent indicating that they would not vote or were not sure who they would vote for.

“When you compute those two, you will find that still, the majority of persons who were interviewed are of the opinion that it is either not worth voting or they cannot see the benefit in voting,” Anderson said.