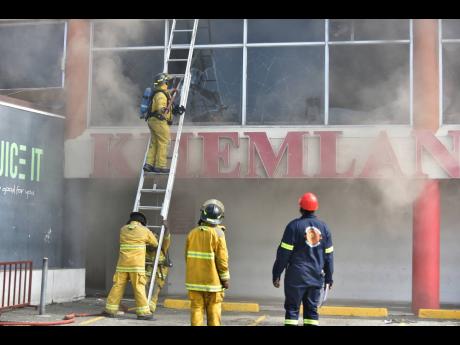 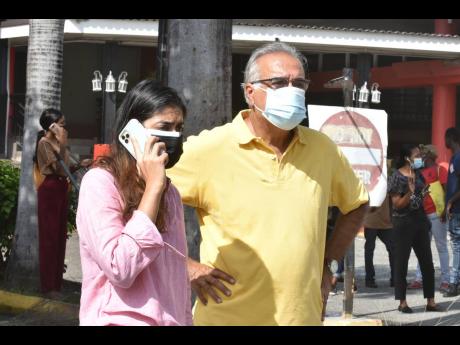 Kenyon Hemans/Photographer
Proprietor Steve Khemlani and his daughter, Anisha Khemlani, watch as firefighters respond to a blaze at Khemlani Mart that started some time before 7 a.m.
1
2

The Jamaica Public Service Company (JPS) is conducting an investigation into Wednesday’s blaze at Khemlani Mart in Manor Park, St Andrew, following reports that a transformer that had allegedly exploded may have started the fire.

Director of Corporate Communication Winsome Callum confirmed on Wednesday that the utility company had initiated its own probe after seeing reports.

“JPS notes the unfortunate fire at Khemlani Mart this morning and has started our own investigations into the possible causes. Our team of investigators was on location gathering information earlier today and is continuing its investigation into the incident,” she said.

At the same time, she however indicated that the company is awaiting the completion of the investigation, as there was no conclusion as yet.

Owner of the plaza, Steve Khemlani, said that a pole broke and crashed into the building, sparking the fire. He said that at least two transformers fell on top of the building.

“One fell right on top of the building and started the fire and there is a generator at the back that is full of gas that would have assisted with the fire,” Khemlani told The Gleaner.

Up to late Wednesday afternoon, the fire brigade was still battling to suppress the fire and had not yet commenced its cooling-down process.

But Khemlani said the fire had mainly affected its jewellery and other stores that span two floors. However, he said those stores may have only suffered smoke and water damage.

Anxious business operators and concerned employees who had turned up for work watched helplessly midmorning on Wednesday as firefighters worked tirelessly to contain the blaze as thick, black smoke encompassed the compound.

“As it is now, the fire is not yet under control, but I can tell you, the fire has been restricted to the back of the building,” Ebanks told The Gleaner Wednesday morning.

At least five investigators were on the scene doing preliminary assessments Wednesday morning but had not yet determined the cause of the blaze.

Late Wednesday afternoon, Ebanks said the firemen were still on the compound trying to extinguish the fire.

A total of seven units and 60 firefighters responded to the blaze.