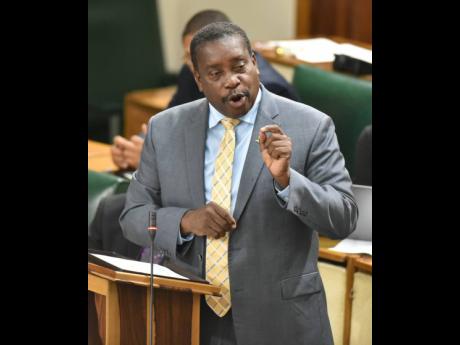 Attorney and privacy practitioner Chukwuemeka Cameron has criticised Jamaican banks for “focusing too much on going digital” and not placing sufficient emphasis on data privacy and data-processing standards that are mandated by law. Cameron was...

Attorney and privacy practitioner Chukwuemeka Cameron has criticised Jamaican banks for “focusing too much on going digital” and not placing sufficient emphasis on data privacy and data-processing standards that are mandated by law.

Cameron was responding to concerns raised by Robert Montague, member of parliament for St Mary Western, who told colleague lawmakers Wednesday that customer information was being shared with third parties without their knowledge or consent.

The privacy expert said the risks outlined by Montague were real, given the recent history of employees and agents defrauding banks and customers.

Cameron also argued that banks have a duty to inform customers about the entities with which their personal data are being shared, the purpose, and the length of time.

Montague’s remarks about the outsourcing of account management were part of a wide-ranging broadside against commercial banks spanning concerns over transaction fees, account dormancy, and branch access.

“If this third party does not lodge my money on time, the bank then goes ahead and charges overdraft fees, again, no operating standards,” he said, adding that Jamaicans are at risk of being robbed daily or having their banking information sold to scammers.

Montague called on the minister of finance and the Bank of Jamaica (BOJ) to take action.

“A banking licence is a privilege, and the issuer of that licence can rein in the entity. Don’t tell me that you, nor the BOJ, has no power to do so,” Montague said.

But president of the Jamaica Bankers Association (JBA), Septimus ‘Bob’ Blake, said there are certain standards, protocols, and obligations governing the outsourcing of services to third parties.

“In terms of those outsourcing arrangements, whatever they may be, those obligations in respect of privacy and confidentiality are consequenced on the third party as well, and there are protocols and arrangements which govern that,” Blake said in a Gleaner interview Thursday.

“There is no automatic translation that because a service is outsourced to a third party that fraud and scamming automatically follow.”

Blake, who is also CEO of National Commercial Bank, said incidents do occur, but the necessary actions follow.

Meanwhile, Cameron said Jamaicans need to be sensitised that they own their personal data and that entities such as banks are accountable and answerable to them and the processing of such information.

“Jamaicans should be concerned that financial institutions and other businesses and government agencies are not respecting their rights by conforming with the Data Protection Act,” Cameron said.

The St Mary Western MP also lamented that his constituents are having a hard time with transactions as some commercial bank branches have gone cashless.

Montague agreed that the future of banking is cashless but said that his constituents are demanding a longer transition period, especially for elderly customers, some of whom disclose their account credentials because they are not capable of using an automated teller machine.

The lawmaker said that aside from Jamaica National Bank, which operates three times per week, there are no commercial banks in his constituency. He also flagged inadequate maintenance of ATMs, some of which frequently break down.

Montague lamented that banks are putting profits over people and are charging fees “as if it’s going out of style”.

In his presentation to the State of the Constituency Debate in the House of Representatives on Wednesday, Montague said he was told that banks credit accounts at least twice per year with interest.

“If this be so, it means that every account has activity at least twice per year. If this is true, how then can an account be dormant? On what basis are they charging a dormancy fee?” he asked.

Montague theorised that if there is no activity on accounts, the banks need to tell customers what they do with the interest earned.

However, the JBA president said transactions must be carried out by the customer in order for an account to remain active.

“As far as I am aware, no bank currently charges any fees for dormant accounts,” Blake told The Gleaner on Thursday.

Further, Montague said if banks lend out people’s money and do not give back a portion of the interest earned, it is not only fraud but downright robbery.

The MP said Finance Minister Dr Nigel Clarke and the BOJ should investigate and fine banks in breach as well as return with interest every dormant fee charged in the last seven years.

“If the banks refuse to pay back and stop the practice, then Minister, you must then report the matter to the police. It’s time the poor suffering bank customers get some redress, and that’s why we are turning to you,” the MP told Parliament.