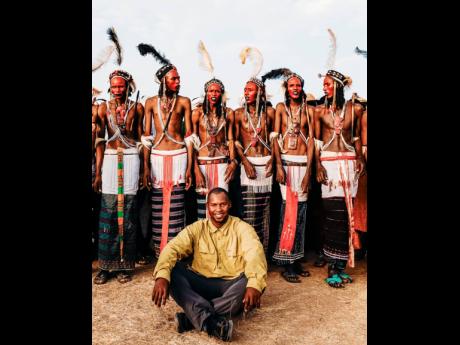 Contributed
Romaine Welds at the annual Guérewol festival in Niger, where colourfully dressed men hope to be chosen by a young bride. 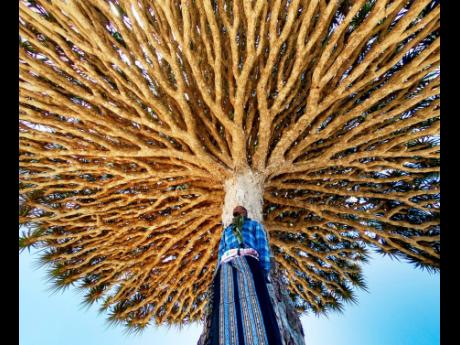 Contributed
Romaine Welds, a native of Falmouth, Trelawny, standing under the blood dragon tree iconic to the island of Socotra, Yemen. 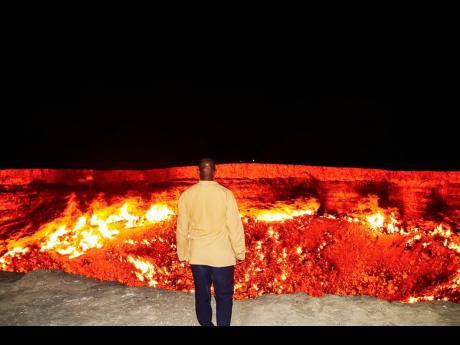 Contributed
The 37-year-old Jamaican Romaine Welds at the Door to Hell in Turkmenistan. 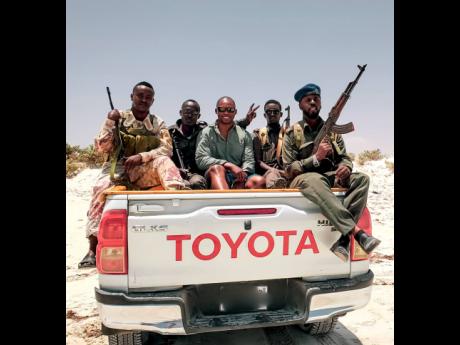 Contributed
Romaine Welds heading to the beach with soldiers in Mogadishu, Somalia.
1
2
3
4

WESTERN BUREAU: Romaine Welds hid from the Taliban in Afghanistan; swam at the beach in Mogadishu, Somalia, with armed bodyguards; and hoisted the Jamaican flag with pride at Babylon Gate in Iraq. The Jamaican, who said he has visited 195 countries...

Romaine Welds hid from the Taliban in Afghanistan; swam at the beach in Mogadishu, Somalia, with armed bodyguards; and hoisted the Jamaican flag with pride at Babylon Gate in Iraq.

The Jamaican, who said he has visited 195 countries, made landfall in Antigua and Barbuda on Sunday, bowing his head and waving the black, green, and gold flag that has become a symbol of his travels since 2021.

The 37-year-old Falmouth-born globetrotter, who works with United Airlines in ground operations in the United States, has experienced 28 wonders of the world in the 15 years since he started travelling.

While growing up in Jamaica, the Trelawny native recalled not having much privilege to travel.

For him, Yemen was a bit of a surprise.

“You don’t see much of the beauty of Yemen on TV, so when I went and I saw these mud-brick skyscrapers,” said Welds in awe. “I mean, they’re like three, sometimes four storeys high and just hanging on the cliffside.”

Another favourite of his was Babylon in Iraq.

“It was pretty interesting when I visited Babylon, which a lot of Jamaicans don’t actually know is a real place that exists,” he told The Gleaner from his villa in Falmouth, Antigua.

He was fascinated with two African countries – Libya and Ethiopia, one because of its rich Roman history and the other for its relationship with the Rastafarians, the culture, and the people.

Welds did not escape the war-torn areas, and his visit to Syria left him in state of shock and despair.

“When I went there, it was still active war zone, right on the border between Syria and Turkey ... . I have seen what the war has done to Syria, how it destroyed homes and lives. It was pretty bad.”

The Muschett High School past student, who later relocated from Trelawny to Goodwill in St James, says he travels on a budget, noting that he is not rich. Instead of staying in hotels, he stays in hostels, and because he works with airlines, the flights are discounted.

He, however, remembers spending US$3,200 while in Niger, where he went for the Guérewol festival, which is a courtship ritual competition among the Wodaabe people.

“That tour was expensive because it required heavy security because the region is not safe. Between Niger, Burkina Faso, Mali, it’s pretty dangerous,” he says.

In Somalia, he had to travel in a bulletproof car, and in Afghanistan, he was forced to wear the national garb to blend in and not be easily recognised as a tourist by the Taliban.

As true to life and frightening as some of the travels were, nothing was scarier than being caught in heavy traffic in Mogadishu, uncertain whether a bomb detected by the police in a moving car ahead of the one he was travelling in would go off.

“That was the worst. The police began firing shots randomly in the air to disperse the traffic because we could go nowhere because of the congestion. I was like, ‘Oh, my God! Are we gonna get out of here or this thing is gonna go off?’”

Since they did not know which car the bomb was detected in, he started to panic.

But Welds will always live with the images of awe-inspiring natural wonders and the memory of the one-leg amputee, who sat in the middle of a busy thoroughfare in Afghanistan begging for food because if he stayed home he would starve.

Welds, who watched a lot of National Geographic Channel programmes while growing up, says his first goal was to do the first new seven wonders of the world – the Taj Mahal in India; the Great Wall of China; the Roman Colosseum, Italy; Petra –the Khaznah, Jordan; Christ the Redeemer statue in Rio de Janeiro, Brazil; the Incan site Machu Picchu in Peru; and the Maya’s El Castillo pyramid in Chichén Itzá, Mexico.

There are three categories of seven wonders, plus seven by CNN Television, and Welds said he did all 28.

“I did the seven natural wonders after. This included Mount Everest, the Great Barrier Reef, the Paricutin volcano in Mexico, the Grand Canyon, and Aurora Borealis (Northern Lights).”

On Sunday, some 20 family members and friends from the United States, Denmark and Vietnam joined Jamaica’s Honorary Consul to Antigua Dr Onyeka Campbell and the government of Antigua to give Welds a hero’s welcome as he arrived at the last country on his list.

“I wanted to finish somewhere where family and friends could get to and also a nice spot,” he stated.

Today, he stakes claim as the first Caribbean national to truly travel the world.