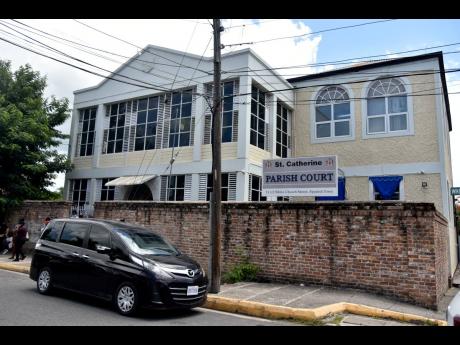 Tax debtors who were among 20 persons picked up across St Catherine during an early morning operation Thursday dug deep in their pockets to settle or part-pay property, education and income tax arrears. The delinquent taxpayers were taken into...

Tax debtors who were among 20 persons picked up across St Catherine during an early morning operation Thursday dug deep in their pockets to settle or part-pay property, education and income tax arrears.

The delinquent taxpayers were taken into custody and hauled before the St Catherine Parish Court after they disobeyed earlier summonses that were served on them.

At the end of Thursday’s court session, Norman Latty, senior compliance officer at Spanish Town tax office, told The Gleaner that she was unable to say how much money was paid but described the operation as a success.

Several of those who were arrested indicated that they had already settled while others paid over the outstanding amounts in court.

Others were allowed by Parish Judge Nicole Kellier to start payments at the end of the month.

Among those who expressed difficulty was operator of Bryan’s Funeral Home, Alvin Bryan, who owed $430,000 but told the judge that he could only pay $10,000.

The judge, however, told him that was unacceptable.

Bryan, however, indicated that he had only conducted four funerals this year, but the judge told him that he should have ensured that the Government was paid.

Additionally, he informed the court, via the TAJ lawyer, that his business was underperforming because it faced stiff competition.

The judge, however, told him to send for more money. Eventually, $70,000 arrived, which the judge reluctantly accepted.

Bryan was subsequently offered bail in his own surety to return with the amount settled.

Lance McConnell, a contract software developer who owed $644,676 in income tax and $139,569 in education tax, also had difficulties.

The judge, however, told him that he would have to pay the principal sum on the amounts.

But McConnell countered that he could pay only $30,000 monthly, and she gave him bail in his own surety, instructing him to commence payment by month end.

McConnell, who is expected to return to court on January 19 next year, was told, however, that he would have to spend 10 days in prison each time he missed the payments.

Sherine Powell, who owed $44,000 in property tax, was in tears as she explained her challenges after the judge told her that “maybe the Government should sell her house”.

Powell, who initially told the judge that she could not pay as she was unemployed, later explained that she had lupus and that her mother, who would usually assist her, had suffered a stroke.

The judge, who was moved by her situation, instructed Powell to pay $11,203 monthly, starting September 30, or spend 10 days in jail if she failed to fulfil her obligation.

While some persons bore concerned looks on their faces, Cleveland Berry, who owed $1.8 million in income tax, was in a cheerful mood when he entered the prison dock.

After hearing how much he owed, he quickly told the court that someone would make the payment and quickly sat, crossing his legs.

But the judge told him he could not “cut his ten in the dock,” eliciting peals of laughter in the courtroom.

The court later received information that $1.3 million was paid at the tax office and Berry was discharged.