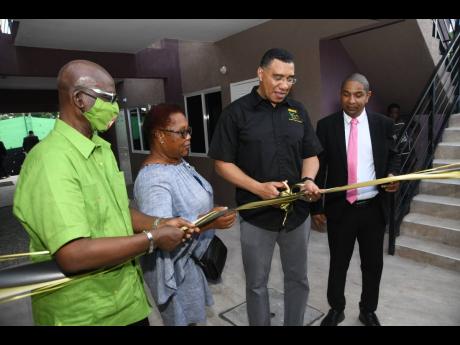 Twelve new residents of the Bell Rock neighbourhood off Olympic Way in St Andrew are thrilled to have a new place to call home that can adequately protect them from the approaching storm as Jamaica braces for severe weather this weekend.

Michael Asserope, one of the beneficiaries who received a one-bedroom studio unit during the handover ceremony for the $37-million indigent housing development on Fourth Street on Friday, said the home came at the right time for himself and his wife.

Asserope told The Gleaner that he was especially glad that his family would not have to worry about leaking roofs as he now had a concrete home unlike the zinc and wooden dwelling they previously lived in.

In November 2018, some 30 families were left homeless after unknown assailants entered the residences of two men and opened fire at them. The attackers also set ablaze their homes and the fire spread to neighbouring residences.

“It's much, much appreciated because you know say it was a task to lose yuh home, so to see what the prime minister do fi we it is really appreciated,” Asserope said.

Late yesterday, the Meteorological Service issued a tropical storm warning for the island as Tropical Depression 9 continued to strengthen in the central Caribbean Sea, moving closer to Jamaica.

The system is expected to significantly intensify by Sunday and is projected to gain Tropical Storm status on Saturday.

In his keynote address, Prime Minister Andrew Holness, who is also the member of parliament for St Andrew West Central, expressed satisfaction at being able to return to the island from the United Nations General Assembly one day earlier than anticipated to hand over the flats situated on a 7,000 square foot parcel of land.

“Because in the event of significant weather, I would want the families to be able to batten up ... in a safe, strong structure,” he said.

The establishment of a sewerage system in the area and enabling its connection to the sewerage main on Spanish Town Road was among the difficulties encountered, Holness said.

He added that although the people were occupying the units on long leases, they would not be the owners of them.

“The persons who were dislocated by the fire would have first preference,” he said, whereas nine of the 12 units will be awarded to the fire victims.

The other three units, he said, would be chosen after deliberations with the local government ministry.

He noted that there would be an ongoing project of rehabilitating the area to rid the community of temporary housing (board structures), which were constructed in 1952 after Hurricane Charlie ravaged the space in 1951.

Local Government and Rural Development Minister Desmond McKenzie said that the Government was also looking to expand the structure.

Forty-seven-year-old Shelton Blake, another of the beneficiaries, was thankful for the home.

He said that during the time in which the structure took to build, he had been renting another space. However, he was glad to be back in the area in which he had been previously living and is expecting to be more comfortable in his new home