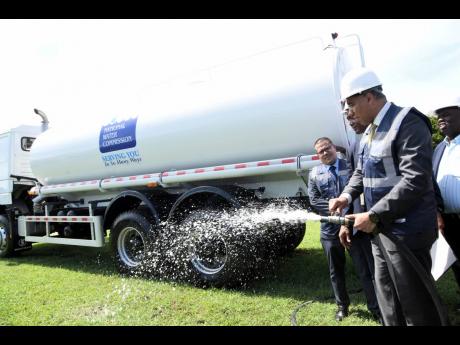 The National Water Commission (NWC) is hoping to shave millions of dollars from its $1.1-billion monthly electricity bill with today’s project launch for the Mona Reservoir floating solar system. Floating solar systems provide an opportunity to...

The National Water Commission (NWC) is hoping to shave millions of dollars from its $1.1-billion monthly electricity bill with today’s project launch for the Mona Reservoir floating solar system.

Floating solar systems provide an opportunity to locate solar systems on the surface of the reservoir. They are expected to offset the pumping station’s energy use and provide excess power to the utility for improved transmission, reliability, and power quality.

NWC President Mark Barnett told The Gleaner that the cash-strapped utility company is seeking to reduce its energy bill by 30 per cent through the initiative, noting that it accounts for 38 per cent of its overheads.

The project is expected to cost US$62.5 million and will be funded by London-based Derillion Energy.

“We’re looking to put up 45 megawatts of floating solar. The intention is [for Derillion] to establish a PPA with JPS, while NWC leases the water surface,” Barnett said, referencing electricity supplier the Jamaica Public Service Company, on Tuesday. (PPA is a power purchase agreement.)

Those investments are in addition to the leasing of four acres of land to facilitate the installation of inverters and batteries, among other equipment.

Barnett said the NWC will have access to 10 megawatts with the intention to acquire a wheeling licence to transfer energy from the reservoir to its other facilities.

“What we’re looking to do is reduce unit cost for energy. We’re looking at NRW as well as changing out our equipment. So, it’s a number of things we’re trying to do at the same time. I guess we’re behind the eight-ball,” said Barnett.

The move could be the precursor for the water company upgrading its fleet to electronic vehicles, although Barnett would not confirm that consideration.

Subject to permits, the project is expected to be rolled out in phases, with completion expected in the first quarter of 2024.

By implementing the Mona Reservoir project, NWC is expected to save US$120,000 annually in the reservoir’s energy processing cost with renewable energy being generated on-site.

The overall savings to the NWC are expected to be in the region of US$2.735 million per year.

Meanwhile, a desilting exercise is to be conducted in the reservoir as part of the tethering installation process.

This means that reservoir’s capacity will increase to include 768,000m3 of additional water.