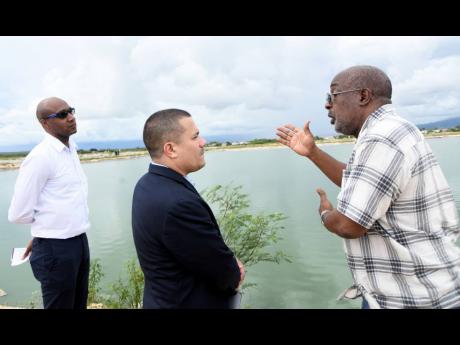 Just over 79,000 residents in the Greater Portmore area are looking forward to breathing more easily after rehabilitation works at the National Water Commission (NWC)-operated sewage treatment plant based there.

First commissioned in 1991 with a treatment capacity of 4.07 million imperial gallons per day, the Greater Portmore Ponds wastewater treatment plant has been the source of many complaints, with concerns over the environmental hazard it poses because of constant overflows, sewage backups and its unbearable stench.

The NWC has upgraded the eastern section of the plant with works done on the pumping station, rehabilitation of sewage ponds to increase inflow, construction of new reed beds and new technology that includes wind-driven aerators to minimise odours.

As he commissioned the plant on Thursday, Senator Matthew Samuda, minister without portfolio in the Ministry of Economic Growth and Job Creation, said that the Government is committed to putting the necessary investment into sewage management.

“What we are seeing here represents a $935-million Government of Jamaica investment for sewage management,” he said. “It is the Government’s intention for Greater Portmore to be seen as the centre of excellence for wastewater management as we invest in similar plants elsewhere.”

Describing the upgrade as a “catching-up”, given the decentralised nature of sewage disposal in Jamaica because of urban sprawl, Samuda said this is one step of many to come as the Government pumps more funds into waste management.

Kieran Cadogan, senior project manager at the NWC, said the plant discharge is in conformity with the National Environment and Planning Agency (NEPA) and National Resources Conservation Authority (NRCA) Wastewater and Sludge Regulation of 2013.

“We have a lot of challenges here in Portmore with what comes in, and we probably need to do some institutional strengthening to bring awareness on the part of users to know what the system was designed for,” Cadogan said.

He noted that, with the recent upgrade, the plant can now accommodate existing and future loads from new subdivisions, including the recently constructed Phoenix Park and other schemes on the horizon.

Cadogan disclosed that the western wastewater treatment plant will receive a similar upgrade in the next three years as the NWC seeks to modernise wastewater management in Portmore.

While welcoming the upgrade, St Catherine Southern Member of Parliament Fitz Jackson chided the NWC for neglecting the plant over the years, a situation which led to tremendous discomfort for residents in Greater Portmore and other communities.

“The system was maintained by the developers at the time of its construction. You could come and eat food over here. But, because the NWC has failed to maintain that level of acceptable maintenance, it had fallen down to where it had become,” Jackson said.

“So, I am looking forward to celebrating the fact that the NWC has been dragged into this upgrade,” he said while pleading for continuous maintenance going forward.

Jackson and Samuda agreed on the need for public education to make residents aware of items that should not be disposed of in the central sewage system.