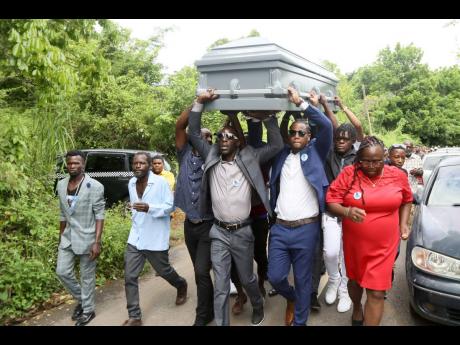 Nathaniel Stewart/Photographer
Pall-bearers hold aloft the coffin bearing the remains of Scot Bamburry on their way to the burial site following a thanksgiving service for the life of the late stevedore at the Shingle Hut New Testament Church in Wood Hall, Clarendon, on Saturday.

A fervent and undying dream that morphed into a nightmare – the story of Scot Bamburry, who was laid to rest yesterday after a service at the Shingle Hut New Testament Church of God in Wood Hall, Clarendon.

Mourners wept openly for the man who they say brought pride to the rural community of Wood Hall when he landed his dream job after his story of resilience amid disappointment was published by THE STAR in May 2021.

Bamburry, who was working at a car wash in the community, had rued not being able to find lucrative opportunities, despite having a diploma in international shipping and logistics from Caribbean Maritime Institute (now Caribbean Maritime University).

Shortly after his story was published, he landed his dream job and began working as a stevedore, loading and offloading ship cargo at Newport Stevedoring Services Limited, a subsidiary of Kingston Wharves Limited (KWL).

“I am overwhelmed. I now start to see where my life is heading. It’s like I was blind and now I can see,” Bamburry told THE STAR in May 2021.

Kingston Wharves reported that Bamburry fell overboard while performing stevedoring duties at the Port of Kingston. The following day, his body was fished from the Kingston Harbour.

An autopsy revealed that he drowned, the family said.

At the memorial service, Sheldon Warren, Bamburry’s childhood friend, revealed he had found solace in the fact that Bamburry died pursuing his dreams, “doing what he wanted to do, and not what he had to do”.

Bamburry was part of a best friend quad that included Warren, Warren’s brother, and another friend. All three men were in tears as they recounted childhood memories nurtured since their days at the St Thomas More Preparatory School in May Pen.

“He was always respectful and always thankful. Even when he faced hard times, he knew where his friends were and he knew we could help him and he never called and asked for anything, but was still thankful when we offered to help. When he did the interview for THE STAR, and the way he represented himself, we were so proud,” said Warren.

Pastor Elisa Craig, officiating minister and Bamburry’s childhood friend, shared that the young man harboured dreams of uplifting youth in Wood Hall and had reignited the hopes of youth in the community.

Recounting their conversation days before he started his job at Kingston Wharves, Craig said, “He said, ‘I’m gonna pull out some of the young people in this area the same way I was pulled out’, and, although he’s deceased, he has given a lot of these young men in Wood Hall hope. He’s a true representation of hope that, amidst all that you’re going through, God will come through for you,” said Craig.

Group human resource manager at KWL, Denise Samuels, told The Sunday Gleaner that despite Bamburry’s short tenure, he was awarded by the company as an outstanding performer. The award, granted in April, came less than a year after Bamburry started at the company.

“We had seen the article in the newspaper and invited him to come in for an interview. He was so excited. In fact, when he showed up for the interview, he advised us that he was pretty much ready to begin working the very same day,” Samuels said.

According to Samuels, the pace at which Bamburry excelled on the job was proof that he was pursuing his passion.

She said that a memorial service had also been held at the location where he died following the tragedy.

Relatives said Bamburry, though the disciplinarian, was also the favourite uncle. They eulogised him as a protector who was family-oriented. Several tributes described him as humble, hard-working and a respectful individual who never frowned when corrected.

Bamburry was also a past student of Clarendon College and the Bethlehem Moravian College.