Second service to be held in Trelawny on Tuesday 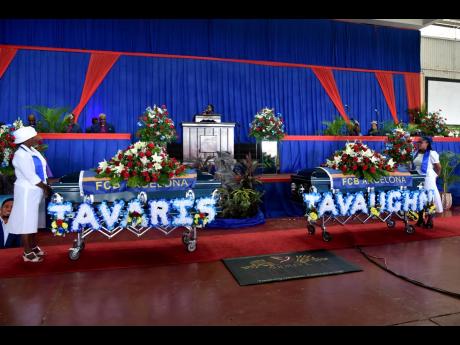 It was a packed house at the New Testament Church of God Convention Centre in Rodon’s Pen, Old Harbour, St Catherine, yesterday, where the thanksgiving service for brothers Tavaris and Tavaughn Bulgin took place.

With mourners asked to wear cheerful colours, only a few turned out in traditional black clothing to celebrate the lives of the brothers who died in a drowning accident on August 14, when they jumped from the American Legion Memorial Bridge, popularly known as Jaws Bridge, on the island of Martha’s Vineyard in Massachusetts, United States.

The songs selected for the service helped to soothe the pain of the double loss as mourners gustily sang This Is Just What Heaven Means To Me, among other gospel favourites.

The solemnity of the occasion could not be escaped as the reality crept through in tributes, proving too much for their mother, Jaqueline Bulgin, who had to be comforted as she gave way to emotions.

One of the brothers’ aunts had to be revived after fainting during the ceremony.

Tavaris’ best friend, Dannareo Fearon, could not hold back his tears during a touching tribute about a friendship which began at Denbigh High School over a “Bigga grape soda” and flourished over the years.

It was not all tears, though, as insight into the lives led by the brothers – who were as close as “two peas in a pod” – elicited laughter.

Family friend Omar George, who the brothers accepted as an uncle, spoke about the bond he shared with them. Had Tavaris not died, he would have been executing an elaborate marriage proposal to his girlfriend during the Thanksgiving Day celebration at George’s house in Connecticut next month, he said.

“We talked about it. He was gonna fly their parents in on the pretext that they were gonna celebrate Thanksgiving at my house,” he shared.

George then shared a humorous tale about Tavaughn’s first date with his girlfriend, when he took the family car to visit her in Mandeville.

“Dear Mommy and Daddy, I have decided to propose to Shara, then elope. We are feeling very ecstatic. Don’t wait up for me. I will ensure Tavaris’ farm takes care of us. Love, Tavaughn,” George said the besotted young man wrote, causing mourners to erupt in laughter.

The tributes all had an underlying theme, as speaker after speaker lauded the brothers, who were overseas on a summer work programme at the time of their deaths, for their good character and exemplary behaviour.

Their former schoolmates from The University of Technology (Tavaris) and The University of the West Indies (Tavaughn) spoke glowingly about how they were both not afraid to share their faith and were helpful and always trying to make a difference in the lives of those they came in contact with.

The boys’ parents – Reverend Keith Bulgin and his wife, Jaqueline, who hail from Clarendon – were also commended for raising exemplary children in these difficult times.

“He (Keith) raised four of the finest kids. In my life, I have worked with thousands of young people, hundreds of pastors’ kids, and I have never met four kids like yours,” George said, to loud applause.

Clarendon South Eastern Member of Parliament Pearnel Charles Jr also shared how impressed he was with the Bulgins’ parenting skills.

“We express condolences to congratulate the parents of these two young men, in a time when our country Jamaica suffers from so much criminality and it is so easy for our youngsters to be diverted the wrong way. Reverend Bulgin, you have been able to grow up in this time two of the finest young leaders that I have ever seen,” he noted.

Charles Jr said when he got the news of the brothers’ deaths, like every other parent in the country, he felt a pain in his belly bottom.

He also made a $200,000 pledge, on behalf of his constituency, towards the scholarship fund the family has started in memory of the brothers. The pledge will be honoured in the upcoming financial year.

Tavaris and Tavaughn will be interred in Deeside, Trelawny, following a second thanksgiving service on Tuesday, October 4, at the Hastings Baptist Church in Deeside.