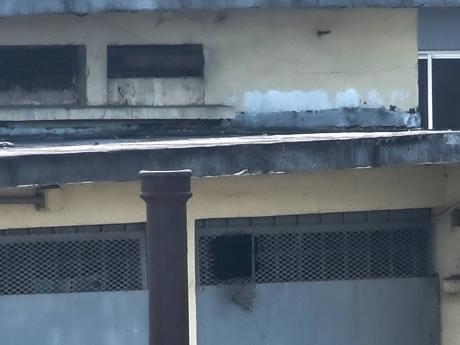 Nicholas Nunes/Photographer
A gaping hole is seen at the rear of Central Police Station in Kingston on Thursday. The ageing building has been slated for renovation for several years. Accused murderer Rudolph ‘Boxer’ Shaw was discovered missing from the lock-up early Thursday morning.

Retired Senior Superintendent of Police Reneto Adams is suggesting that the Jamaica Constabulary Force (JCF) consider housing high-risk criminals in its custody at Up Park Camp, the headquarters of the Jamaica Defence Force. Adams said such a move...

Retired Senior Superintendent of Police Reneto Adams is suggesting that the Jamaica Constabulary Force (JCF) consider housing high-risk criminals in its custody at Up Park Camp, the headquarters of the Jamaica Defence Force.

Adams said such a move should be considered to reduce the number of jailbreaks occurring, a problem plaguing the JCF.

Since August last year, more than 10 criminals have escaped from lock-up across the island. These include individuals who are facing murders and illegal possession of firearm charges.

Shaw, who is facing two murder charges, was nabbed in the Cayman Islands in July and deported to Jamaica.

“A prisoner is not supposed to escape custody from a cell. As far as I know, when a prisoner breaks out of a cell or escapes custody, the first indication would be that it is a matter of a lack of proper supervision,” he said.

Adams, who spent more than 40 years in the JCF, contends that this issue was not so commonplace in his tenure.

“I don’t remember during my administration in the police force if we’ve ever had a prisoner escape from my custody. Maybe when one was sent to the medical doctor or to Bellevue; I won’t guess on that,” he said.

His solution is to put soldiers in charge of supervising those in lock-ups and to install CCTV systems to monitor them.

“If I were the commissioner, I would recommend to the [national security] minister to keep people like these at Up Park Camp,” he said. “It would be desirable for a camera to be placed in that particular cell on a 24-hour basis and a monitor out front be monitored by an independent police officer.”

Attorney-at-law Peter Champagnie, who was representing Shaw up to the time of his escape, told The Gleaner that he would no longer represent him if he is recaptured.

“I am absolutely amazed that the police did not have the necessary security in place concerning his incarceration given the fact that when he was apprehended the last occasion, it was in the Cayman islands and he was brought back here,” he said.

Champagnie is calling for a probe at the highest level to ascertain the conditions under which Shaw escaped.

“It is hard to imagine someone of their own initiative [succeeding] to escape. I am no security expert, and I also bear in mind that a part of the building [Kingston Central Police Station] is exposed to one section of the roadway, and, therefore, I would have thought they would have had cameras at the various points,” he said. “Something like this just can’t happen. Something is wrong,”

Senior Superintendent of Police Stephanie Lindsay, head of the JCF’s communications arm, told The Gleaner that high-profile criminals such as Shaw are kept under tight security while in custody.

“We have different levels of security at the jail for different kinds of persons, so he [Shaw] would be placed in one of those high-security areas,” she said.

Lindsay said that the investigation into Shaw’s escape is ongoing.

“When IPROB (Inspectorate and Professional Standards Oversight Bureau) of the JCF does the investigation, they look at a number of things. They look at whether the protocol in place was adhered to, whether or not persons were negligent in exercising their duty. They also investigate to determine whether or not there was any involvement of persons in the process,” she said.

“Based on their findings, they’d make the recommendations. We’ve had persons dismissed, we’ve had persons charged criminally, persons reprimanded and fined. There are various things that happen.”