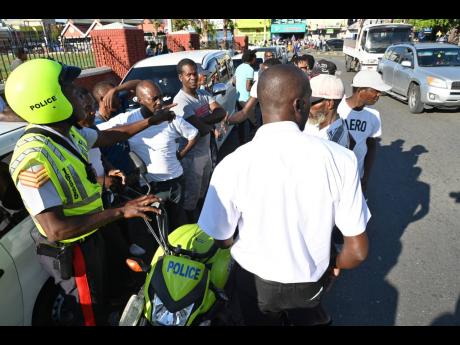 Rudolph Brown/Photographer
A policeman interacts with taxi operators who withdrew their services at North Parade in downtown Kingston on November 14.

Uncertainty hovers over public-transport operators as to whether the Government will accept a payment-plan proposal to settle outstanding traffic tickets. That has triggered fear among cabbies and busmen amid increased fears of spending Christmas...

Uncertainty hovers over public-transport operators as to whether the Government will accept a payment-plan proposal to settle outstanding traffic tickets.

That has triggered fear among cabbies and busmen amid increased fears of spending Christmas in jail and having their licences revoked, says Oscar Finnikin, communications director of the One Voice Transportation Group, which represents public passenger vehicle (PPV) operators and investors.

Finnikin has also claimed that some investors are selling their vehicles and pulling out of the industry.

Two weeks ago, hundreds of taxi operators parked their vehicles and embarked on a two-day, multiparish strike, demanding an “amnesty payment plan” for reams of outstanding traffic tickets.

Following the strike, the public transport lobby groups submitted a proposal, including a payment plan, to Transport Minister Audley Shaw. The proposal requested one to 18 months’ time to pay their arrears.

But there has been no response since then, said the One Voice Transportation Group.

“Today is 11 days, and if my calculation is right, we have not heard from Government. There is now fear in the sector, and when I say fear, I mean crippling fear.

“The fear of them being arrested and taken to jail for the outstanding tickets. There is fear of losing their licences, and there is fear of spending their Christmas in jail,” he told The Gleaner in an interview on Sunday.

Finnikin said that up to Saturday, 102 drivers within the Kingston Metropolitan Region had not returned to work since the strike.

“We have seven owners who have put for-sale signs on their cars, and we have three investors, two of them are now going and buying jelly downtown Kingston and selling it over in Portmore and St Andrew, and we have another one selling market goods,” he added.

When contacted on Sunday, Shaw said he could not say much on the matter but confirmed that the proposal had been received and had been submitted to Cabinet for discussion.

Finnikin stressed that it was important for the Government to consider the proposal as there are operators who owe for more than 1,000 tickets. He estimates that more than 80 per cent of the roughly 200,000 drivers have outstanding tickets.

The One Voice spokesman warned that the sector would collapse if the Government rejects the proposal.

While acknowledging that there are rogue operators on the roads, Finnikin said that the majority are upstanding individuals who comply with the road code. He said that systems glitches and other factors have caused many operators to rack up a large number of tickets.

Two of those reasons, he said, are having no badges and for stopping at undesignated bus stops.

He blamed the Transport Authority for not issuing badges in a timely manner and the National Works Agency for removing some bus stops after the Constant Spring Road upgrade.

Finnikin shared that the bus driver who was recently charged in an eight-vehicle collision on Constant Spring Road has 117 tickets for not stopping at a bus stop along the corridor.