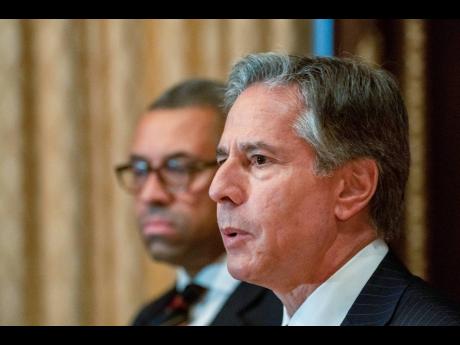 It began on Wednesday with a Canadian MP called Garnett Genius making headlines by getting into a war of words with a freelance reporter from the parliamentary press gallery. To have the surname Genius must be an incredible burden, especially for a politician, but his actions on this occasion did not match those of a genius — according to the reporter. The next day, that song was playing again in my cranial jukebox, when newly minted British Foreign Secretary James Cleverly was interviewed at the United Nations General Assembly. The topic was, Russia possibly using nuclear weapons in the conflict with Ukraine, and President Putin’s resentment of NATO.

Mr Cleverly looked into the camera and stated that NATO had never been an aggressive force only defensive — that was really not so very clever. Maybe with his exalted position on the world stage, his head is in the clouds, or possibly jammed so far up his own unmentionable orifice, that he forgets the inconvenient truth of NATO’s aggressive role in attacking Afghanistan in 2002, and in its intervention in Libya in 2011.

Then, those many members of NATO joining George W. Bush’s ‘Coalition of the Willing’ to aggressively attack Iraq in 2003. During that prolonged conflict, depleted uranium bombs and cluster bombs were used against Iraqi civilians. Both weapons are strictly prohibited under international law. With his military background, it would have been very clever for Mr Cleverly to have kept his mouth shut, rather than make such a reckless statement.

Of course, such statements are nothing new; about 2,500 years ago, Greek playwright Aeschylus wrote: “In war, truth is the first casualty.” Again, it must be a burden living up to a name like Cleverly in politics, but being reckless reminds me of another recent British elected official. Mark Reckless won a seat in the Welsh Parliament and later as an MP in Westminster.

In his decade as a parliamentarian, Mr Reckless earned a reputation of being a rebel, switching allegiances several times, and representing five or six different parties. Reckless by name, and reckless by nature.