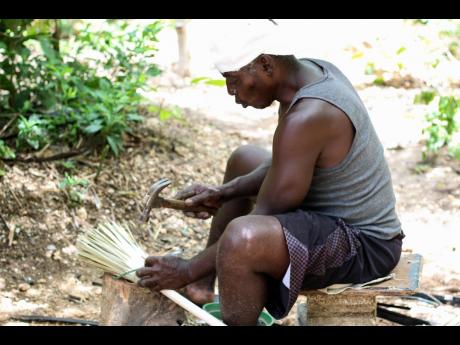 Contributed
Wayne Michael Irving is playing his part in Canaan Heights, by teaching youth the technique of broom-making and the significance to Jamaica’s culture. He sits here with yard brooms made with bull thatch. 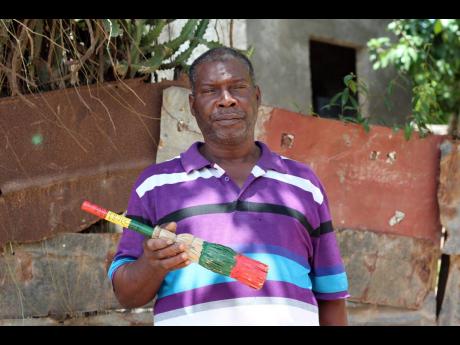 Photo by Stephanie Lyew
Fenton Bent believes in the business of brooms. 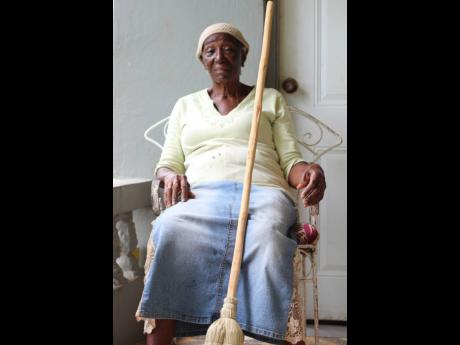 Photo by Stephanie Lyew
Dezeta Ranger is one of the eldest, and few women in Canaan Heights, who developed a special way of sewing the wire into the silver thatch used to make house brooms. 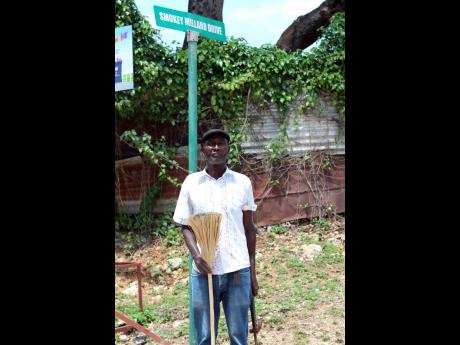 There can never be a shortage of household cleaning tools in Jamaica, and for a good reason. One of the best is rooted in the island’s culture: the broom made of thatch palm. With a straightforward, robust design, the appearance represents simplicity, but its symbolism is anything but. According to Francine Bacchus, a businesswoman with a deep interest in entertainment and culture, the thatch broom is a timeless artefact.

“These types of brooms have a strong cultural value in communities in Africa. However, the style of those made in Jamaica is unique, and there is always a beautiful story behind the gathering of the material to the process of putting it together to make the final product,” she told Living.

“Each time I see one, I am reminded of being inside my grandma’s house. I believe every Jamaican home should have one, even if it is not for use, because it is a cultural artefact,” Bacchus continued.

It just so happened that her significant other, Oshane Mamby, was raised at the centre of broom-making. As a young boy growing up in Canaan Heights, Clarendon, he learnt how to make them and started a business from selling the ordinary household item, Bacchus shared.

She said, “I love the story of Canaan Heights as a production centre of things made of natural materials and as a community of self-sufficient people whose parents either made brooms to provide for their families or did not want their children to make brooms as it was something looked down on.”

Recalling a recent request from a client overseas, the young entrepreneur, who is also the manager of her significant other’s career, explained that the broom is celebrated in several cultural spaces, noting the importance of ‘jumping the broom’, and she said, “not just any broom … because of that, there are persons who are willing to pay high prices for our craft”.

Broom-making, she said, is now considered a dying art. “When I watch him [Mamby] make the brooms, which are used as merchandise for his music career, it amazes me. The amount of time and skill it takes. But like many small-scale ventures, it is underappreciated, underpriced, and undervalued. It is not until an investor comes in that we celebrate it. But we need to make way for this piece of culture. It is a lifestyle.”

From one end of Bongo Natty Avenue to Smokey Millard Drive, the yards are filled with thatch quailing in the sun to the sounds of hammers driving nails into wood. The broom is the heart of Canaan Heights, said Errol ‘Trainer’ Lee. “I am making and selling brooms from the age of 10 when my parents came here in 1972, and that time it was selling for six cents for one. It deserves promotion and can be marketed as an even greater product because it is representing physical and spiritual cleanliness because naturally, broom keep the place clean,” he told Living.

Another broom-maker by the name of Wayne Michael Irving said that there are not many individuals alive with the knowledge on the history of - and how to make - brooms with thatch. He is urging for more education in the community of the significance of the everyday tool. Mamby credits him as being his educator in his juvenile years.

Fenton Bent, who also moved to the community around the same time as Lee, explained that youngsters learning “the steps of broom-making back then, like me, peeked over walls to catch the older persons who had the know-how. It was like a secret.” He said he has never seen any other source of income as stable, and he currently supplies secondary schools in and around Kingston and St Catherine with brooms.

“That said, some brooms are certainly better than others, and one thing is certain, those made in Jamaica and specifically in Canaan Heights where a lot of craft-making occurs, should be a respected part of our culture,” Bent said.