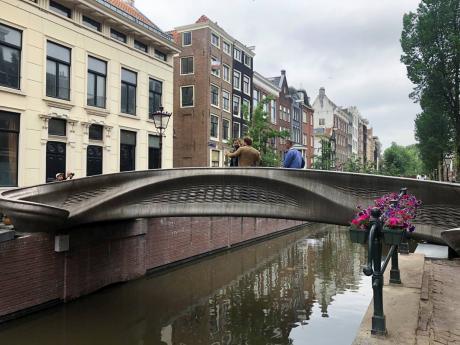 AP
A steel 3D-printed pedestrian bridge spans a canal in the heart of the red light district in Amsterdam, Netherlands. 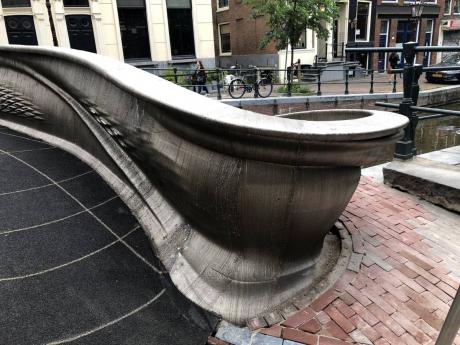 Dutch Queen Maxima teamed up with a small robot Thursday to unveil a steel 3D-printed pedestrian bridge over a canal in the heart of Amsterdam’s red-light district.

Maxima pushed a green button that set the robot’s arm in motion to cut a ribbon across the bridge with a pair of scissors.

Tim Geurtjens, of the company MX3D, said the bridge showcases the possibilities of the technology.

“If you want to have a really highly decorated bridge or really aesthetic bridge, suddenly it becomes a good option to print it,” he said. “Because it’s not just about making things cheaper and more efficient for us, it’s about giving architects and designers a new tool – a new very cool tool – in which they can rethink the design of their architecture and their designs.”

The six-ton structure will be loaded with sensors that researchers at Imperial College London will use to monitor the bridge in real-time and gauge how it reacts to being used by pedestrians.

It will remain in place for two years while the bridge that previously spanned the canal is renovated.

Micha Mos, a councillor at Amsterdam municipality, said the bridge could help bring in new tourists as the city seeks to clean up a neighbourhood known for seedy clubs and noisy stag parties.

“This may attract a new kind of visitor, one who is more interested in architecture and design, which will help change the way the neighbourhood is perceived as more of something you want to visit but visit respectfully than it has been over the few last decades,” he said.