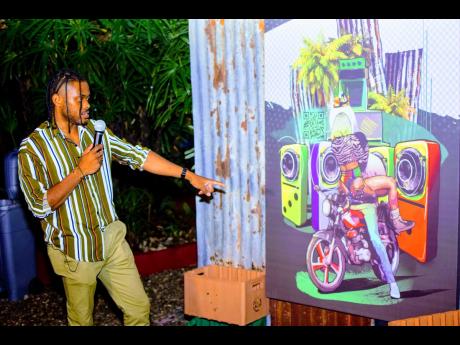 Contributed
Thompson gives more insight into one of his pieces, ‘Timeless’. 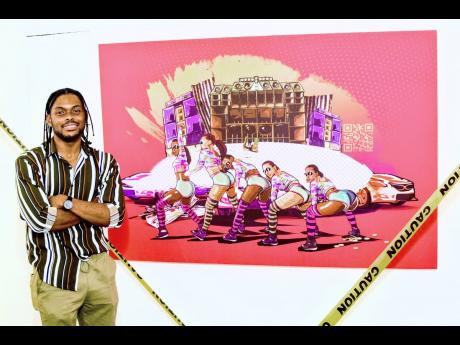 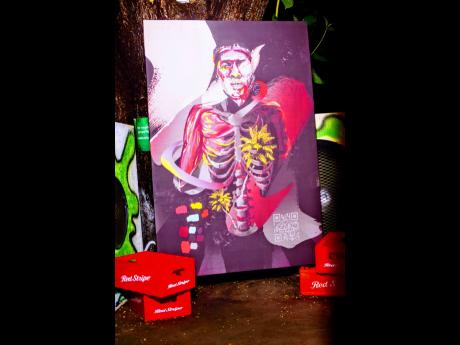 Anthony Minott
Thompson shows off the human side with ‘Entertainer’. 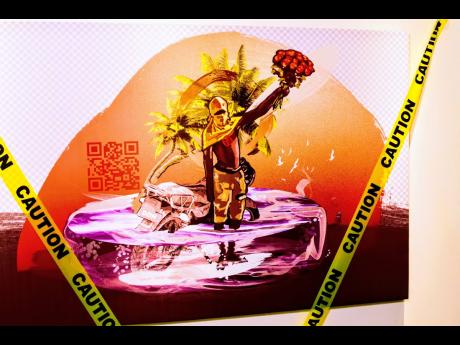 Ahtony Minott
Confessing that this was his favourite piece from the collection, the Jamaican artist paid tribute to dancehall with ‘Ghetto Love Letter’. 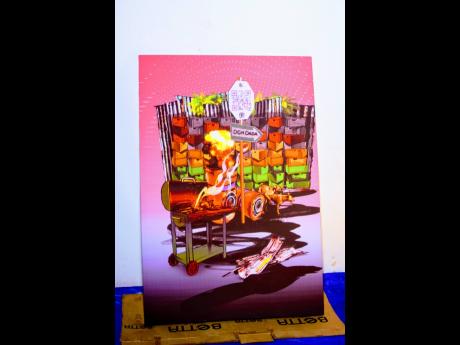 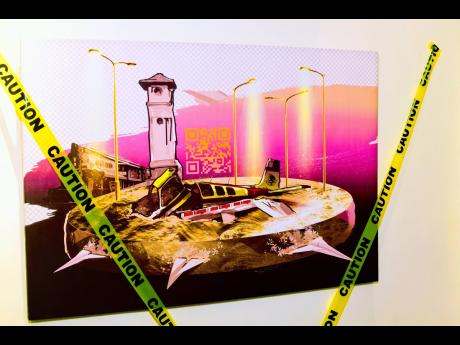 Anthony Minott
The title piece, ‘Paper Planes’, gives an interesting take on what would transpire if a plane crashed in Half-way Tree square.
1
2
3
4
5
6

Artist Bonito ‘Don Dada’ Thompson has been a lover of fine art for as long as he can remember. “Growing up, I used to draw all over the house,” he recalled, as spoke of his genuine love for the art form on the final night of his successful art show entitled Paper Planes.

Celebrating friends, the uncontrolled emotion for dancehall and the opportunity to give back, Thompson wanted to share his point of view with the world. And it doesn’t get any more personal than reflecting one’s life and vibrant culture.

For the last two years, the self-taught artist who has worked with Jamaica-Mexican fusion restaurant Chilitos, and recording artistes Damian ‘Jr Gong’ Marley, Common and PJ on the remix of their summer song What Do You Say out this year – has been perfecting his craft and fine-tuning his predilection for the art form that is dancehall.

“I wanted to find some way to bring my work to life on still canvas. And went with augmented reality,” said the passionate painter, graphic designer and avid Avatar fan, noting that each piece created via Photoshop took about 20 minutes to transform into augmented reality mode (AR).

Printed on canvas and gallery wrapped, the dancehall art exhibit begins at Di Endz. Don Dada Lane showcases jerk chicken, beer crates and a young avatar roaming the streets. From there, you walk over to a crowd favourite, ‘Video Light’. Inspired by a friend of his, Thompson admired the passion, fire, style and confidence exuded in the piece. ‘Timeless’ highlights the major role that music and politics play in the culture, with the depiction of rivalry between Gully versus Gaza and Jamaica Labour Party versus People’s National Party. How could we leave out ‘Dancehall Queen’ boasting a certified hottie posing in her element, with natural herbs and sweet pineapples.

His title piece ‘Paper Planes’ explores what would happen if a plane crashed in a central location such as Half-Way Tree, affiliating art with chaos. A God-like artiste figure painted in a humanistic light is his interpretation of the iconic ‘Entertainer’, Vybz Kartel. A ‘Ghetto Love Letter’ stood out as his ode to dancehall. ‘My Life Matters’ is a social commentary of all things Jamaica and Jamaican, from the mongrel to the bicycle and the couple on the bike. ‘Gyal Segment’ shares a dancehall diva in her zone, and ‘Bike Back’ illustrates the zinc fence, speaker box and a woman on the bike with her male lover. All pieces from the collection are beautiful, but when they are brought to life by scanning the bar code, the interactive AR experience is mind-blowing!

When asked why dancehall, Don Dada responded, “Why not dancehall?” He said dancehall has been a game-changer, and it is disappointing, he shared in his presentation, that the genre is celebrated in good times and overly criticised when it negatively reflects society. “It’s dancehall through art on canvas, representative of the culture and things you see in your space. It’s the fusion of art, culture and technology, presented in a traditional, modern and futuristic way. It’s ahead of its time and pays homage to the country,” he said.

With 10 pieces featured and a further five on the last lap, the interacting audience showed their love and appreciation.

The National Library has also decided to give Paper Planes an official home in Jamaica’s national repository, making this entire show a proud part of recorded history.