Singer expands her brand with activewear 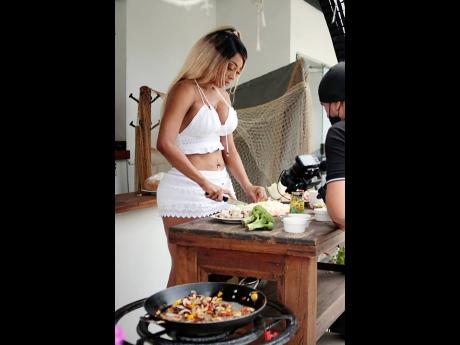 Contributed
Nutrition for Superhumans is another brand Barbee finds herself dabbling in, because fitness is nothing without eating well. 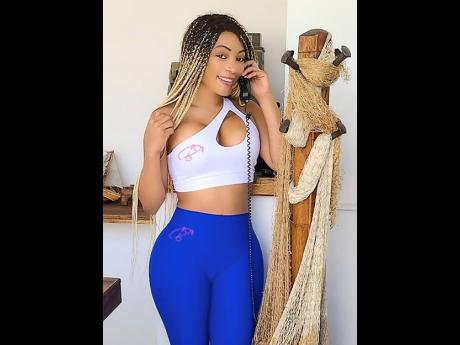 Contributed
The peek-a-boo style of this sports bra makes Barbee feel extra flirty, and she approaches fitness like a fun day out any time she wears them. She pairs them with knee-length bicycle tights. 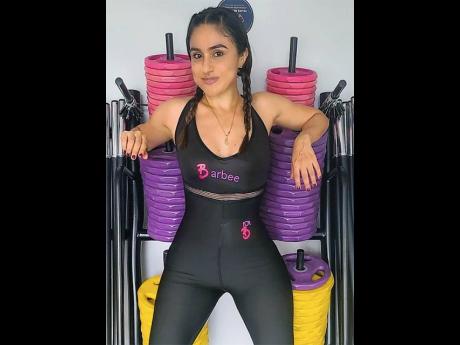 Contributed
For women working on abs and glutes, the full bodysuit is designed so that there is major support in those areas, but also helps with shaping the entire body at the same time. 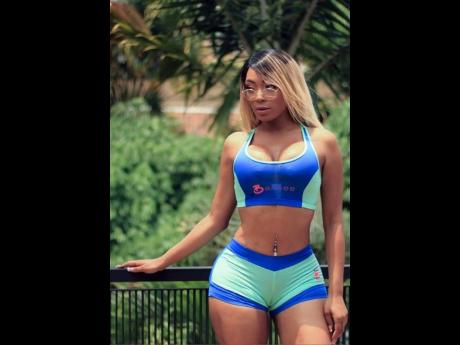 Contributed
The sports bras and shorts from Barbee Bratz are designed in different lengths, depending on the coverage a woman wants. 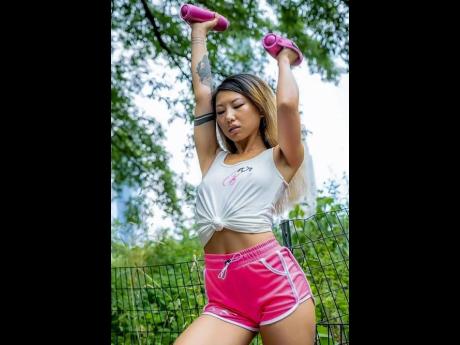 Contributed
Simple tank tops can be found in the Barbee Bratz activewear collection. 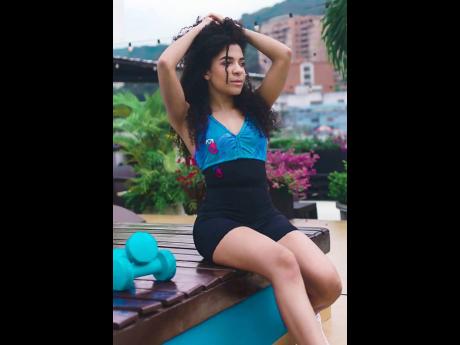 Contributed
The sleeveless, sculpted shorts bodysuit, like this ocean blue-and-black combo, is made to flatter and support all body types. Pair with a waist trainer and for a yoga or studio workout. 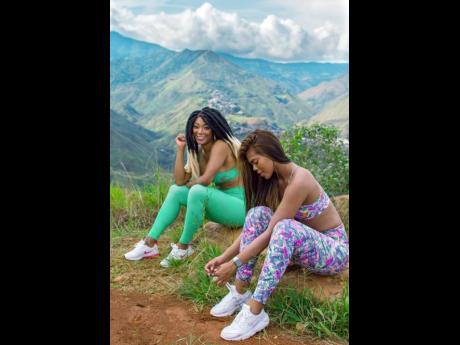 Contributed
The Barbee Bratz leggings are made from supportive yet breathable spandex material which is ultra-comfortable, versatile and can be worn everywhere, all day. 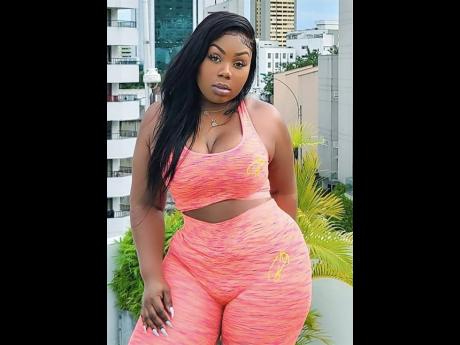 Contributed
It was important for the Barbee Bratz line to represent all women, says the singer-turned-activewear designer. High-waisted leggings are sexy and provide coverage and support. 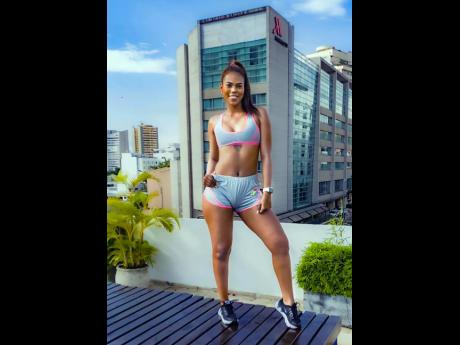 Contributed
The Barbee Bratz line comes in stylish and simple designs such as this matching sports bra and shorts set. 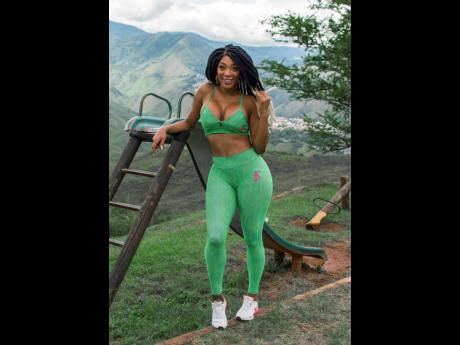 Contributed
Nigerian-Jamaican singing sensation Barbee is serious about fashion and fitness, and her activewear designs are made so that women can feel and look their best while working up a sweat.
1
2
3
4
5
6
7
8
9
10

It has been said that the pandemic resulted in a global athleisure boom, and that more and more fitness fashion brands are emerging that promote health, wellness, and deliver comfort as a result. Reggae-dancehall entertainer Barbee was not to be left out, and she is no stranger to fashion and fitness. With a dream to expand her brand beyond music, her first foray into designing was with her waist trainers, which were officially launched in 2018. It was advertised that the pieces, under the line she branded, Waist Game Tight, were made of high-tech material that allowed the body to sweat more and inevitably burn more calories.

She told The Gleaner, “Waist trainers were the introduction, and at the time, these became an accessory for every woman in the gym. The functionality of the waist trainers was also very important to me, too. Then, I realised that we all love to be cute even while working out, and there was more I could explore in terms of designing activewear.”

Barbee got an epiphany during one of her morning exercise routines, looking at the shapes of other women while in the gym and taking note of the style of clothing they would wear, which, she said, “was often limited to whatever they could find. Some persons are stylish, but maybe because of body types, there were others that just wore comfy clothing”. She wanted to change that. “Women shouldn’t have to sacrifice fashion for function and the fit lifestyle; it can be a combination of all three,” Barbee added.

Although her workouts may not happen as regularly as she expects, having to balance working on an album with music executives in Columbia, Barbee says she always makes sure to exercise in style. She said, “I’ve been in Columbia for over eight months; here I’m able to be so creative and work with different producers on new music, but also work on the designs and check out new patterns for athletic wear and other fashion – that’s big business.” Being the busy bee she is, the entertainer wanted to design an activewear line that was not only stylish and supportive, but allowed the flexibility to go from the recording studio, auditions, photo shoots to the mall, and then to the gym. That is exactly what her latest investment, Barbee Bratz, allows for. Barbee shared that the brand’s purpose is to help women “feel and look their best while working up a sweat.”

The past International Reggae Awards recipient, singer, songwriter, actress, and now fitness fashion entrepreneur knows the business model will receive some criticism as she has for her body, but she knows her products and the newly curated outfits come at an affordable price tag. “The price, to stay on a fit path, should be relatively reasonable. First, I’m all about self-love. Throughout my entire life my weight fluctuated; finding balance is key. I was being told I was too fat to be a singer when I was a teenager, and I was exposed to the gym early, but I had to accept my body. All women are beautiful, and we come in all shapes and sizes. Still, times have changed – focusing a lot on lifestyle – health is wealth, so it should be easier to get access to what we need to be healthy,” she said.

Speaking of health is wealth, Barbee has made some changes to her own routine. “Personally, I’ve adopted a vegan lifestyle, but sometimes I include fish, so I’m not opposed to a Pescatarian diet. I’m very involved in nutrition programmes, just as much as my activewear brand. I’m creating an empire, an international sports brand, and being the example all at the same time. Now, I see my Barbee Bratz line being represented by women all over the world; it makes me happy,” Barbee continued.

Barbee is of Nigerian and Jamaican descent. She began her singing career at seven years old and was even part of a girl group called Best Kept Secret. Her first hit was Missing You, featuring Junior Kelly, and since then she has recorded and performed with the likes of dancehall icon Beenie Man, soul music legend Bobby Womack, and hip-hop female star Trina. While working in Los Angeles, Barbee earned a role in the 2012 movie House Arrest that starred rapper The Game and actress Stacey Dash, known for her role as Dionne in the 1990s feature film Clueless.