O’Shane and Tavia tie the knot on their 12th anniversary 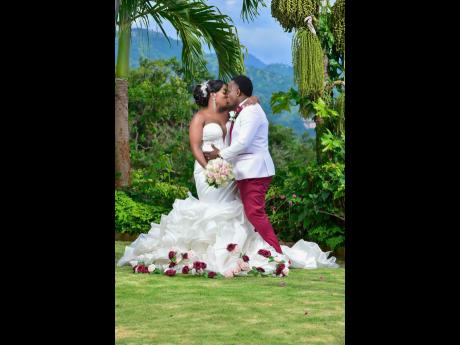 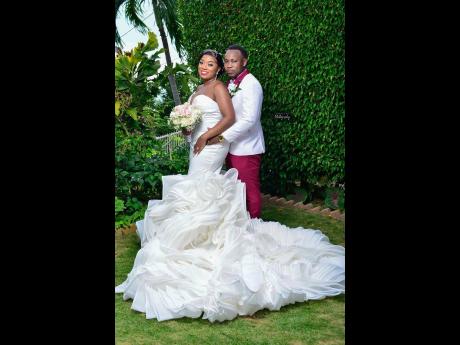 Foster Shots Photos
Saying I do to each other was the perfect anniversary gift. 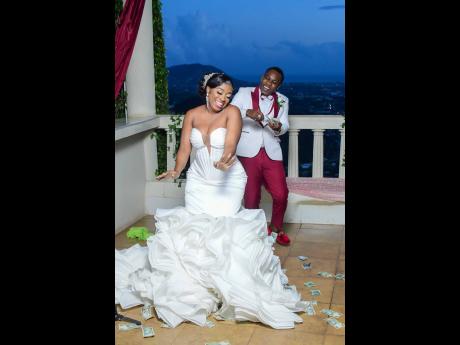 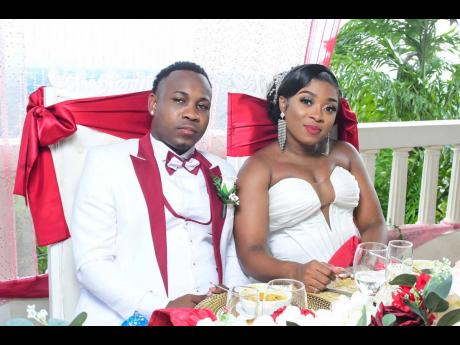 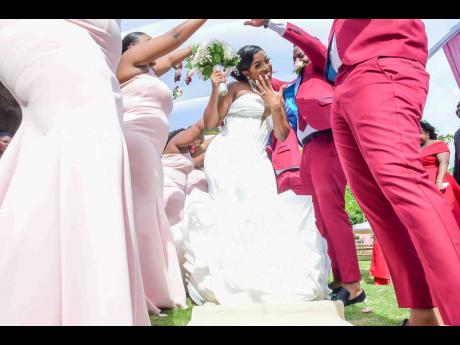 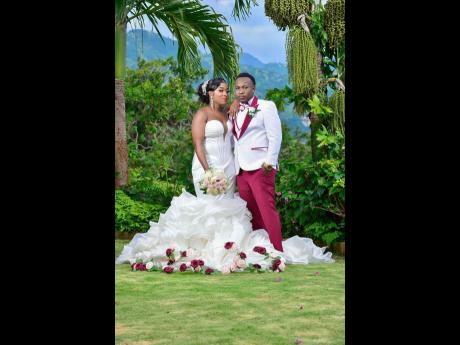 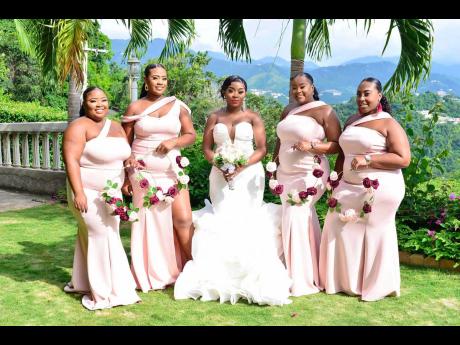 Foster Shots Photos
Tavia was elated and grateful to be supported by her girls on her wedding day. 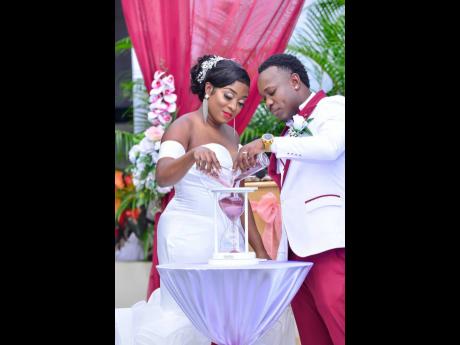 Foster Shots Photos
The Huies perform the unity ceremony, symbolised the joining of two souls into one. 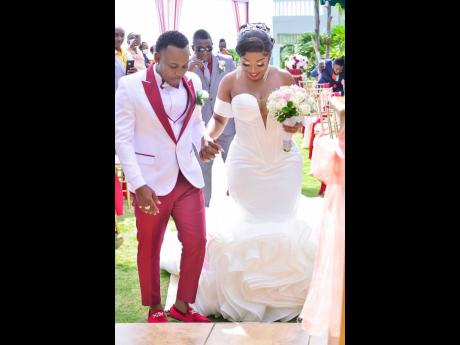 Foster Shots Photos
Such a gentleman: the debonair O’Shane escorts his beautiful wife-to-be on their wedding day. 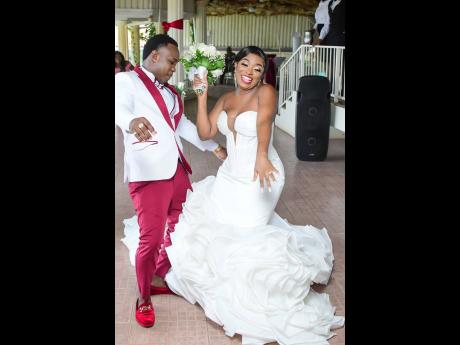 Foster Shots Photos
The newlyweds dance together for the first time as husband and wife. 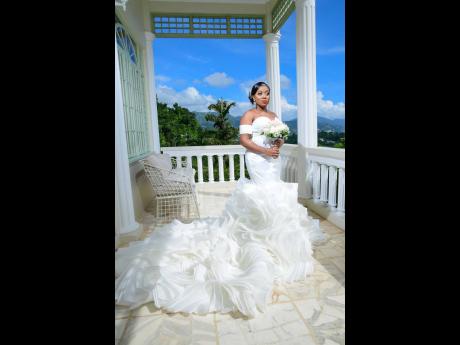 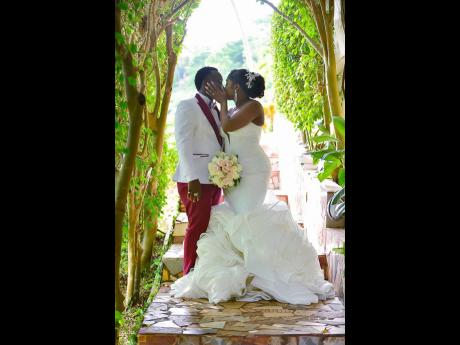 Love is the greatest gift one can give and receive. The Huies unlocked that secret the moment they became high-school sweethearts. As teens, O’Shane received the best early birthday present when Tavia became his girlfriend. Then years later, it was Tavia’s turn to be surprised beyond measure when her beloved asked for her hand in marriage on her birthday.

“I met my wife at our high school, Excelsior, way back in 2009. A friend of mine actually told me about her. Him being around her gave me the chance to get to know her,” O’Shane told Island Wedding. During these first encounters, he found her reserved, thinking that she was a quiet little church girl. “Little did I know that wasn’t the case at all,” he added with a laugh.

“My first impression of O’Shane was he was very humble and was nothing like how the other boys appeared to be when they approached me. He was cute, too,” she said, giggling in schoolgirl fashion as she recalled the days of young love. Among that highlight reel was going on their first date at Hope Gardens. “It was great! We both discovered from then that we appreciated the time spent together alone, just having conversations and jokes, more than going out to fancy dinners.”

Selfless by nature and kind to a fault, Tavia stays mesmerised by her Prince Charming’s ambition and drive for success. He may be stubborn, but he has a straightforward character, and she admires that spicy variety.

“I have learnt so much about life through O’Shane. He would always say I was sheltered, so I get life lessons, and it always comes as a surprise to me. I look to him for advice on everything. I think he is full of wisdom and has good judgement,” she asserted. Going through the highs and lows, she realised that he was the one when they called it quits but still managed to find their way back to each other.

Tavia’s alluring beauty continues to captivate O’Shane’s heart. Beyond that, his queen is loving and kind, sometimes a bit miserable, but overall, an amazing woman. Making it to half a score and then two more is far from easy, and O’Shane is grateful that the love of his life has seen him through all of his accomplishments and has stood by him through smooth sails and choppy seas, never giving up on him as the captain of their relation-’ship’.

“Manhertz (Tavia) has played a major role in the person I am today. She’s always motivating me to do more and to become a better version of myself. Through thick and thin, I knew if I should ever get married, she would be the one. She deserves everything I have.” So he gave her his heart on her birthday in 2020 when he asked her to be his wife.

Leading up to engagement day, Tavia posed the wedding question. O’Shane proceeded to sit her down and devise a plan for the proposal. He declared that whenever their anniversary, November 6, landed on a Saturday, that would be their engagement day. Tavia expressed frustrations in waiting two years to make that happen, so he cut it short.

“On October 14, 2020, her birthday, I decided to ignore her birthday wishes. I laid my heart out on a piece of paper and popped the question,” he shared. Tavia, who said yes, appreciated that it was done privately while they got ready since she is not a fan of crowds. And she loved the letter. “It meant a lot because writing and expressing his feelings in that much words was never his thing.”

Confessing that she never had a dream wedding in mind prior to planning, the bride-to-be said she did have the wedding of her dreams, courtesy of her husband, who was there every step of the way to see that the vision was met, along with close family members and friends.

November 6, 2021, on their 12th anniversary, Tavia and O’Shane joined in holy matrimony to become the Huies. City View Hotel in Smokey Vale, St Andrew, provided the romantic backdrop for the highly anticipated nuptials. The stunning bride headed up the aisle in a breathtaking ivory mermaid gown with a plunging sweetheart neckline and ruffled finish from LuxBrides Ja. Her handsome groom received his bride with open arms and an open heart.

Exchanging vows, I Dos, and a ‘You may now kiss the bride’ later, the newlyweds carried the merriment of their love from the ceremony into the reception. Specially invited guests watched in awe and excitement as the loving pair shared their first dance as husband and wife to a mix of their favourite tracks: You are the Reason by Calum Scott, The One by Tamar Braxton, and Dun Rich by Davido and Popcaan.

“My wedding was exactly what I hoped for, and on that day, I realised how loved I was because I did not have to worry about anything being in place. My mom was not able to make it to our wedding, and they ensured that she saw everything from beginning to end,” Mrs Huie shared. Her husband chimed in by reflecting: “My wife said it was excellent; it was her day. As long as she was happy, nothing else had mattered. The best moment for me was turning around and seeing her beautiful smile, knowing moments from then, she would officially become Mrs Huie.”