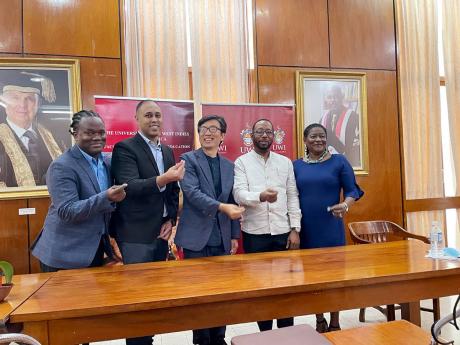 Contributed
Ambassador of the Republic of Korea to Jamaica, Suh Jeong-in (centre), along with representatives of The University of the West Indies, following a public lecture entitled: ‘Change in the International Situation and the Way Forward for Korea-Jamaica Relations.’

Ambassador of the Republic of Korea to Jamaica, Suh Jeong-in, gave a public lecture entitled ‘Change in the International Situation and the Way Forward for Korea-Jamaica Relations.’

The virtual address was hosted by The Office of the Principal in collaboration with The Department of Modern Languages and Literature in the Council Room at The UWI, Mona Campus.

In an in-depth presentation, the ambassador highlighted current political and economic crises facing the world and their implications for Latin America, the Caribbean, and Korea, while offering several suggestions to bolster bilateral cooperation.

Citing ongoing changes in the international environment, the ambassador homed in on five trends that he said will have “great implications” for the entire world.

The five trends he cited are:

• The return of geopolitics and the arrival of a new Cold War with the conflict between the United States and China;

• The complication of global issues due to the coupling among politics, security, and the economy;

• The accelerated digitalisation caused by the pandemic, and

• The prolonged disruption of global value chains and the declined globalisation.

Addressing the first trend, Ambassador Suh Jeong-in underscored the fact that climate change and the COVID-19 pandemic are among some of the most urgent global issues requiring a show of global solidarity.

“Climate change is the task of humanity that cannot be solved with the efforts of one single country,” he emphasised. Similarly, he said the COVID-19 novel coronavirus pandemic represented another “alarming example of the need for balance and harmony” between humanity and the ecosystem.

“However, faced with an unprecedented disaster, the countries of the world engage in more explicit acts of vaccine nationalism, showing little solidarity,” he lamented, adding that such a move had resulted in vaccination inequality. “Only 15 per cent of the world’s population, mostly from low-income countries, remains unvaccinated. For example, in Yemen only to per cent of the population has been vaccinated; in all of Africa, only 19 per cent. The pandemic is teaching us the saying, ‘No one is safe until everyone is safe’,” he added.

He informed the online audience of mainly students, staff, and academia that Jamaica has been doing relatively well with its management of COVID-19 despite its low vaccination rate of 24 per cent. At the same time, he urged greater collaboration to fight the pandemic, noting that Korea had developed efficient systems and technologies to effectively respond to the pandemic and had also activated systems to effectively trace the coronavirus and offer the necessary care to its citizens.

“Today, I want to say further that as academics, experts, and students, let us work together to institutionalise response systems for effective pandemic management for future generations to narrow the gap between developed and developing nations’ response mechanisms and capabilities,” he said.

The ambassador also warned that waning global solidarity as well as ongoing challenges posed by the Russia-Ukraine conflict and frosty US-China relations were further dividing the international community and called for peace and stability in order for countries to achieve economic development and growth.

“There is now widespread concern and fear about political and security threats that might overwhelm trade, economics, and cooperation centred on Europe. [And] as a Korean diplomat, I pay more attention to the so-called “return of geopolitics” or “the arrival of a new Cold War” because it could affect the Korean Peninsula, where the acold War reality is still at play because of the division and confrontation between the two Koreas,” he said.

As for US-China relations, the ambassador said “the hegemonic competition” between the two countries was “a structural variable that will not go away easily”, but he is hoping that “the momentum of global cooperation will be recovered”.

In the case of Jamaica, the ambassador pointed out that rising energy prices in Europe linked to the ongoing Russia-Ukraine crisis could not only negatively affect local businesses that trade in these markets, but also the country’s bauxite industry. He was speaking against the background of looming uncertainty over the operations of West Indies Alumina Company (Windalco), whose parent company, United Company Rusal, is domiciled in Moscow, Russia, and is headed by Oleg Deripaska. Deripaska was one of seven oligarchs sanctioned by the British government earlier this year over the Russian invasion of Ukraine.

In addition, Ambassador Suh Jeong-in cautioned that because the pandemic had sped up the rate of digital transformation and technologies by several years, some countries could suddenly find themselves at a disadvantage.

“Digitalisation, which has developed faster than we expected due to COVID-19, can be a double-edged sword. Those who keep up will have opportunities, but there will also be those left behind,’ he said.

“Another thing is that digitalisation can cause mass unemployment. Likewise, the management of data and cyber security to prevent hacking as a result of the digitisation of information becomes more important, but there is a challenge due to the absence of international norms that regulate this,” he explained.

At the same time, Ambassador Suh Jeong-in said that Jamaica is strategically placed to benefit from disruptions in the global supply chains but would need to incorporate policies that will allow it to maximise its advantages.

“If the supply chain is restructured with an emphasis on resilience to respond to crises, the length of the chain, the distance, will be shorter. This means that the world will be divided into blocks around the main markets.

“For Jamaica, which is strategically located between trading blocks, in the middle of both the western hemisphere and North and South America, the opportunities are numerous,” the ambassador said, adding that the island’s logistics location is attractive to exporters due to its geographic proximity and access to shipping lanes, large English-speaking markets, a stable democracy, and strong commercial potential.

“Both Korea and Jamaica could benefit from such investments, creating a win-win situation with greater access to our respective markets,” Ambassador Suh Jeong-in added.