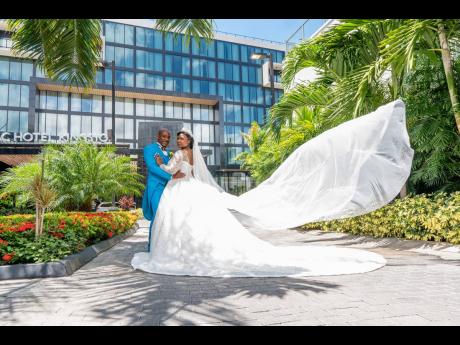 Mark Brown
With Safari’s elevated veil blowing in the wind, the duo make a dashing pair as they pose for wedding photos. 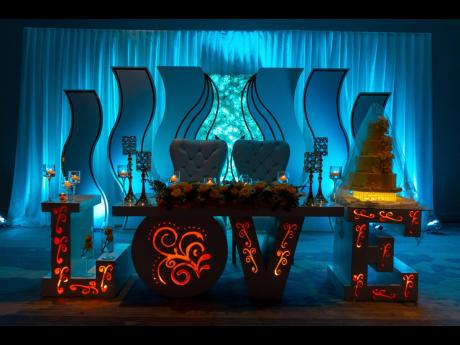 Mark Brown
Love was definitely in the air for Dwayne and Safari. 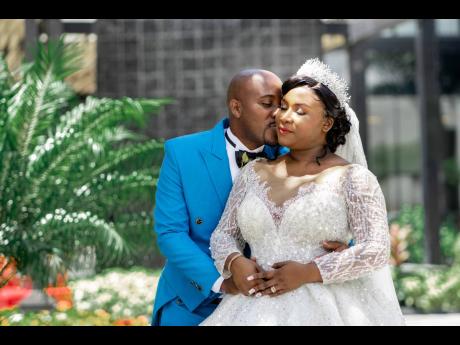 Mark Brown
With a tender kiss, the newly-weds celebrate happily ever after. 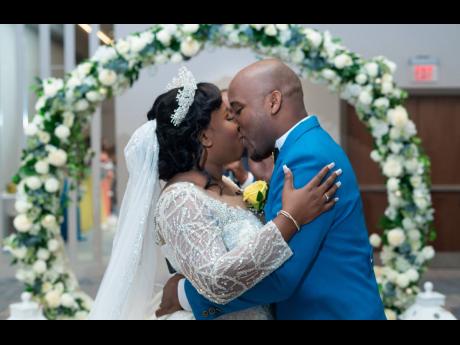 Mark Brown
As the pastor declared, ‘You may now kiss the bride’, the couple shared their first kiss as husband and wife. 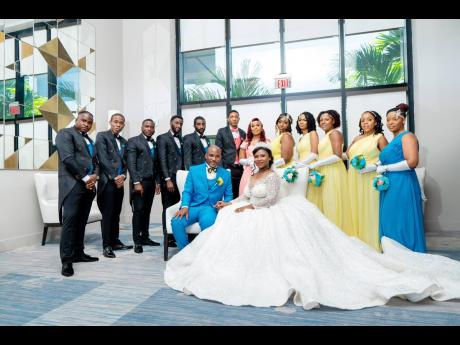 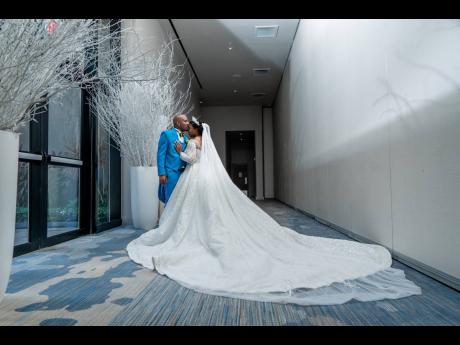 Mark Brown
This couple are the epitiome of the saying, ‘Love is not something you find. It’s something that finds you’. 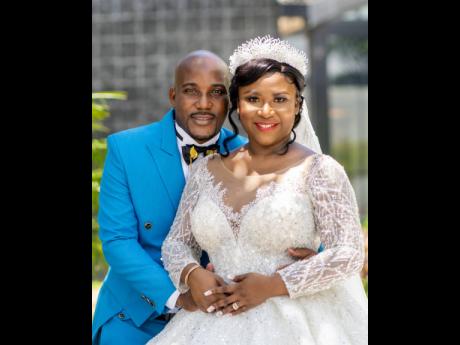 Mark Brown
From the moment they met, Dwayne knew he had met the one. While for Safari, after fasting and praying, God gave her the answer she knew all along. Today, they are Mr and Mrs Jacobs.
1
2
3
4
5
6
7

On November 15, 2018, Dwayne Jacobs thought it would be a typical day at work. That was until Safari Anderson entered the room that afternoon. “She was beautiful, had a great smile and captivating eyes that made my heart skip a beat each time she stared at me.” It wasn’t long before Safari was humming a similar romantic tune. And she would soon play melodies of love and holy matrimony with her ‘DJ’.

Her initial impression of Dwayne was that he was mysterious and always on the move. But as she got to know him better, Safari fell in love with his hard-working, spontaneous, godly, humble, and loving nature.

Their first date was casual but romantic. Safari had butterflies in her stomach for the occasion. The two went on to become official in February of the following year.

“Dwayne is not just a provider; he’s a protector. He has ensured that our relationship is not only built on love, but that God is at the heart of it as well. He’s always reminding me about how God loves his people, and once we can try to do the same, nothing can break us apart. He also ensures that any issue throughout the day is resolved before we go to bed,” she said.

Being with her ‘DJ’ has changed her whole outlook on life. He has taught her to take things one step at a time by learning to exercise patience and putting her faith into practice.

For Dwayne, he couldn’t help but mention Safari’s beauty, kindness, and thoughtfulness. Her love and care are icing on the already sweet cake. “My sugah plum is always encouraging and reminds me of how great I am as a man. She is always willing to share what she has, no matter how small it is.”

Being big fans of the outdoors, the couple can usually be found relaxing the mind and body by the river or on the beach. “It reminds us of how grateful we should be for each other,” he added.

While DJ began playing for his beloved’s heart from the first day they met, Safari shared that she brushed it off the first day he approached her since true love no longer existed in her eyes. But this changed fast. “The church had a one-month fasting, and I decided to be a part of it. I told my mom and explained that I was just going to put God to the test and that I needed a husband.” Her mother was thrilled and decided to join in.

Going down to the specifics about who she wanted her husband to be, her conversation with God included letting go of the desire to second guess anything. “So when Dwayne said to me in January 2019 that he’s in love with me, that he’s not looking for a girlfriend, he’s looking for his wife who he has found, and that when I’m ready, I should give him a call, I was scared to death because I had the same feelings towards him. Everything I asked God for during my fasting was happening one by one.” This was in week two of her fasting. What she didn’t know was that he, too, was fasting - to find his wife.

After 10 months of courtship, Dwayne decided that it was time to make an honest woman out of the love of his life by asking her to be his wife.

The plan was to lead her to think they were going out for dinner at a restaurant. He told his fiancée-to-be, who was dolled up in a chic blue outfit, that he had forgotten something at the house and returned home to finalise arrangement. “I asked her brother to call her in the house for something as I set up the video. Her brother gave her a pillow that had our picture printed on one side and had the words ‘Will you marry me?’ written on the other side. Surprised and frightened with excitement and joy, her eyes filled with tears of joy and happiness as she said yes.” He proposed in 2019 on her late grandmother’s birthday, December 26.

A happy Safari gave her account of the private and intimate proposal. “I’m the only girl of five, so you can imagine his journey in asking for my hand in marriage. He got me all dressed up for dinner, only to drive around the community and back home to propose to me. My mom and brothers were online watching everything with my favourite Whitney Houston song playing in the background, ‘I will always love you.’ I don’t know how I was still standing as I felt dizzy reading the words ‘Will you marry me?’ on a cushion that he had made. It was just perfect.”

Leaving the wedding planning up to Future Events, the process started out smoothly until the COVID-19 pandemic made the process difficult. They went from a beautiful plan A of marrying on December 20, 2020, because the family was unable to travel, to figuring out plans B, C, D, and E.

Safari said yes to an exquisite ball gown from LuxBrides JA for the dress. Surprised that the dress option was a limited find at local boutiques, she was happy to find the one. “I knew exactly how I wanted to look and how I wanted my dress. Luxbride gave me my custom-made luxury dress that had all I wanted in my dress, which made me look and feel like a black Disney princess finally ready to meet her Prince Charming,” she added.

Set to tie the knot at AC Kingston Hotel, the nuptial date was changed to June to facilitate the attendance of loved ones. But the bride became ill the day before and ended up in the hospital. Unable to walk down the aisle, they changed the date to August. “I made it down the aisle this time,” the beautiful bride said with a smile.

The groom shared that his favourite moment was reading the vows, while his bride savoured the moment when the pastor declared, “You may kiss your bride”. “I was finally able to kiss my husband with one foot lifted. I felt so proud to be his wife and that I found the one God kept for me.”