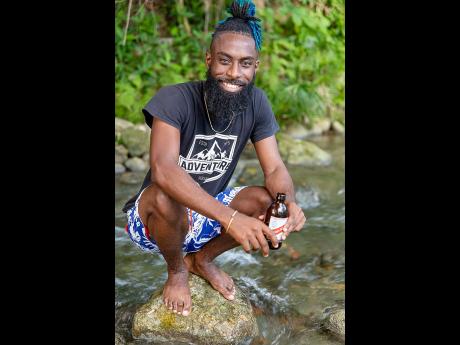 Contributed
Maleek Powell recently led a team of influencers and media professionals on the Red Stripe Jamaicanness Tour to discover the beauty and uniqueness of Hidden Springs in the hills of Discovery Bay, and Twin Rivers in St Mary.

Nothing gives content creator Maleek Powell greater satisfaction than discovering new, hidden gems across Jamaica, sharing his discoveries through pictures and videos, and watching as people fall in love with Jamaica through his guided tours.

Commenting on his passion and drive to showcase the beauty of our island, especially to locals, the founding member of Adventure Squad Jamaica said the reaction of people when they visit somewhere for the first time is truly rewarding. “I can’t explain the feeling I get when I go somewhere new for the very first time, where it’s another part of the island, where the temperature or the water is different, and where I meet new people. It’s like I experience Jamaica over again every single time, and the best part of it is sharing it with like-minded people,” he said.

A photographer and videographer, Powell grew up in Bog Walk, St Catherine, living with his parents and eight siblings. They weren’t rich, but they had a rich family life as they often travelled together, visiting places across the island, especially Ocho Rios’ Bay Beach. His father, Clarence Powell, was the breadwinner, a self-taught jack-of-all-trades, and a great influence in Powell’s life.

His father worked at The Jamaica Pegasus hotel as a senior duty engineer, but was also an electrician by trade, a plumber and a mason. In high school, Powell developed a passion for information technology (IT), but through his father’s influence, he also became a certified electrician and mechanic while still in school. Meanwhile, his father was also a hobby photographer, which rubbed off on Powell. He would also bring home National Geographic magazines very often, which, along with the family’s trips across the island, caused Powell’s love for adventure to begin to take root.

Fast-forward to his early 20s, Powell took up a job in IT at the RJR Communications Group, now RJRGLEANER Communications Group. Around this time, he bought his first camera and began watching YouTube videos to improve his skills. Working in the company allowed him to ask media workers all of his camera-related questions, while he got to see more of Jamaica, tagging along with the team whenever they went out of town. It wasn’t until a beloved employee at the company suddenly passed away that Powell and a group of friends realised that life truly is short and decided to take up exploring and enjoying Jamaica seriously. “After the incident, I said to them, ‘Guys, this cannot be it. This can’t be life-work, home, work, home, and the occasional party, and then that’s it.’” They decided to begin visiting lesser-known nature spots in Jamaica once a month, sharing their experiences online so that others could be motivated to explore Jamaica. They created a WhatsApp group which Powell later named Adventure Squad, which developed over time to be called Adventure Squad Jamaica, a movement dedicated to uncovering the island’s beauty and off-the-track gems.

As the years went by, Powell still felt like there was more to life and took a risk by leaving the traditional corporate work setting to pursue his passions, including freelance photography. “I started to feel really boxed in, and I realised the corporate [workplace] wasn’t for me. I felt like there was so much more out there that I could achieve. It was something that I grappled with for maybe two or three years, until I finally got to the point where I took the leap,” he said.

Since then, he has amazed people locally and internationally with his nature-based content, featuring hidden gems across Jamaica. This helped many people find these locations through Adventure Squad, and he has now branched out into videography, with the goal of creating documentaries one day. He also motivates the public through his personal platforms and hopes to get into motivational speaking. His vision is to merge all of his passions into one rich experience for the public, which could include setting up a physical location.

When it comes to the value he places on exploring Jamaica, Powell hared, “What I want is for more Jamaicans to go out and see their country — travel on a whole. It makes you more cultured. I hope that by sharing my experiences, I can take the stress out of people having to do all the research themselves, and instead, they can just go on their adventures with ease. I also want to bring indirect assistance to the communities in these locations from the purchases made there. I love Jamaica, and I am [one] of the biggest advocates for Brand Jamaica”.