Couple together for 75 years 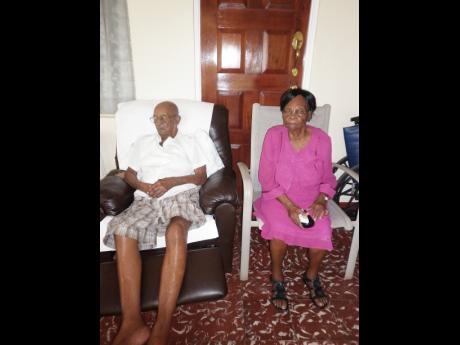 PHOTOS BY SHANIQUE SAMUELS Sydney and Maudlyn Andrade together for 75 years. 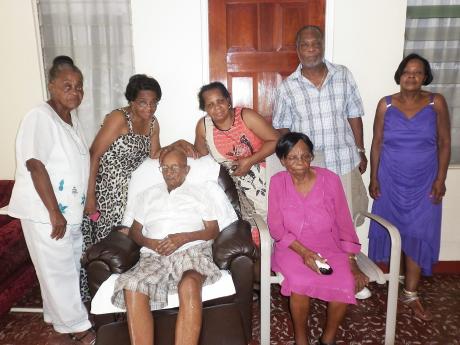 SYDNEY AND Maudlyn Andrade have been together for 75 years. He is now 102 years old and his wife of more than 60 years is 93 years old. They met in 1939 at a market fair dance and got married 15 years later after the birth of their fifth child. The couple who is originally from Clarendon, built their home in the rural community of Orange River, where they raised their family.

The couple's third of 11 children, Senveno, described his father as a hard-working farmer who wasn't afraid to plough the lands to feed his family. "He planted cane, orange, chocolate, and coffee. When he farms, my mother would go for the load and then take it to the market," Senveno told Rural Xpress.

He added that she went as far as either Brown's Town or Coronation markets to sell, and would stay there from Thursday through Saturday, then she would return home with the proceeds from her sales.

One of the couple's granddaughters, Rosemarie, described her grandmother as a disciplinarian, who placed great emphasis on education. "She invested in our education. She made sure we went to school, even when we had no lunch money. On the days when we had no lunch money, she would make lunch and meet us on the way at lunch time and let us eat and go straight back to school," she said smiling with pride.

After many years of farming, Sydney decided to try something else. He joined the Jamaica Constabulary Force as a district constable where he served at the Chapelton Police Station for 30 years until he retired. He went back to his fields and worked the lands, until he was no longer able to, as he started to develop Alzheimer's disease.

Together, the couple has seen four generations of offspring directly from the Andrade bloodline.

The Andrades recently held an appreciation celebration at the family home in Orange River in honour of their parents. Mrs Andrade expressed gratitude and a sense of pride knowing that her children, grandchildren, great grandchildren and great great grandchildren - most of whom have migrated, all came back home to show their appreciation and say thanks for the hard work she and her husband put in over the years to care for them. "I am happy that they are here, I feel very good to see so many of them here," she said.

Hyacinth, who is also a granddaughter, described the Andrades' longevity as a blessing. "They lived an honest life, they worked hard for what they have and took good care of us. They kept the Sabbath and, in return, God has blessed them. They are a living example of what God promised us in the Bible if we are faithful to him."