Food for the POOR 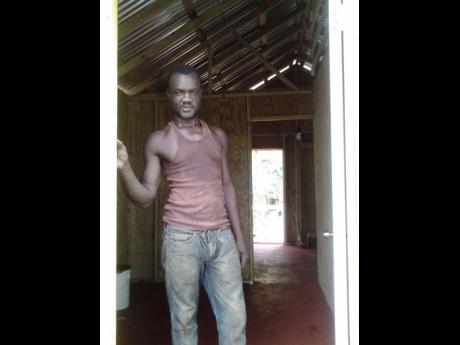 PHOTO BY SHANIQUE SAMUELS Vincent All stands proudly in his new house donated by Food For the Poor.

NOW 42 years old, Vincent Allen is a much happier and comfortable man than he was eight months ago. He recently received a two-bedroom unit from Food For The Poor (FFTP) after his plight was highlighted in The Gleaner's Rural Xpress on Saturday, March 22, 2014.

In the article titled 'Vincent Allen - down but not out', he told the story of how he ended up living in a shack that did not do much in terms of providing shelter from the weather elements.

Up until three weeks ago, he slept on a piece of old rugged board inside the shack. Vincent was a farmer in Linstead, St Catherine, who was making preparations to expand when he was shot six times and left for dead. He survived the attack, but had nowhere to go after he was forced out of the house in which he lived, and ended up in Clarendon. He still tried farming on a small scale, but that could not put a proper roof over his head.

Director of Recipient Services at FFTP, Susan Moore, recalled that Vincent's story, which was published on The Gleaner's online platform, was forwarded to her by the FFTP Chairman Andrew Mahfood.

"A team went and visited him, investigated and found out that he was in dire need and so he was placed on the priority list and he received his house in October," said Moore. She said Allen's case was one of desperate need and that's why he was given priority.

"It was a blessed day and we are so blessed by this experience, and on behalf of FFTP and the wonderful donors, Vincent is now in a better place. This is one of the reasons why we as a charity-based organisation have been trying to highlight situations such as these and why we encourage more local donors to come on board."

An elated Vincent fumbled for words to express how he felt after receiving a house to call home. "Weh mi did deh mi neva did comfortable an mi neva did see a way out fi move forward so mi really glad The Gleaner and FFTP came and see the situation an help mi out. Mi really feel good and happy about it."