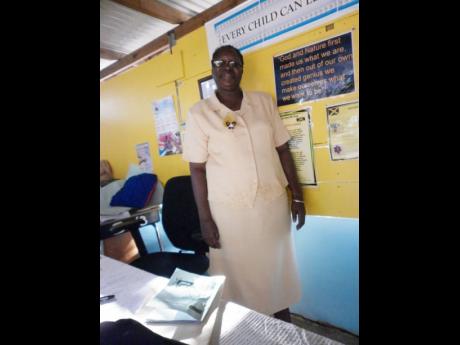 "You can't see the children for who or what they are now; you have to see them for what they will become in the future," a profound statement from a veteran educator at the Chapelton All-Age School, Molly Jackson.

Jackson has been at the school for 35 years, since 1979, even though she has been in education since 1975, when she landed her first job as a pre-trained teacher fresh out of college. She continued her studies and later received her bachelor's degree in education from the International University of the Caribbean.

Jackson spoke passionately about her experiences as a teacher: "Teaching is something you do out of love. (It) doesn't pay much, but the reward that is felt when you see your students become successful individuals and make something good of their lives, that far exceeds any monetary reward that could ever be paid."

During her tenure, Jackson said she has seen many students come and go, most of whom she has nurtured, tutored and fed. She said among her myriad contributions to the school was a breakfast programme she started. "Many years ago, I initiated a breakfast programme and had begun to seek sponsors, but the Ministry (of Education) took it over shortly thereafter."

As many as three generations of students have passed through her hands as she recalled teaching the children and grandchildren of several of her past students.

Luke Fearon, a past student of the Chapelton All-Age School, said Jackson is like a second mother to him. "She takes me like her own son. She taught me how to cook, wash, bake, and even how to set a dinner table. She showed me the ropes as to how to navigate my way through certain life situations," he said. Jackson has also taught his two sons who are now in high school.

The teacher, counsellor, and now vice-principal said moving forward, she would love to see a balance in the education system where life skills are also taught alongside the academics. She opined that that will better prepare the students for what lies ahead in the real world.

After a total of 40 years in education, Jackson said she is close to retirement. "I'm now in the departure lounge, in another year or two I will be out (of the classroom)," she said, without any regret, because she knows she has done her best in going above and beyond the call of duty where teaching is concerned.

"I feel satisfied with the contribution I've made in moulding the lives of many of this nation's children and future professionals."