Social worker empowering youth through a culture of respect 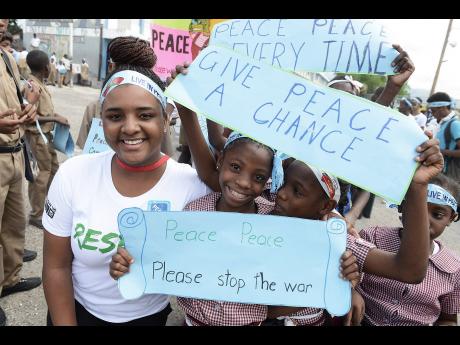 Contributed
Jordanne Edwards participating in a Peace Day march with students from the Corporate Area.

"People ought not to be individualistic, thinking only of themselves," says Edwards. "I know that if I want to make a change in this world, I need to start with me, understanding the core of who I am while maintaining the integrity of those around me."

Edwards has been involved in the multi-corporate Respect Jamaica initiative during her internship under the Social Work programme at the University of the West Indies and, following her graduation, is currently the activation specialist for the programme.

During her tenure with the programme, Edwards admits to learning many important lessons in human rights. "We have to create a culture of respect and dignity. I want respect to echo across Jamaica, both rural and urban. Respect is what will incite the change we need to see so that people feel open in expressing who they are," she said.

With this in mind, Edwards was one of the organisers behind the Youth Ambassador programme, which will be shaping 150 ambassadors island-wide in forming a collaborative network that enables youth to actively participate in social action and advocacy.

Edwards was one of two ambassadors preselected to pilot the programme based on her performance while volunteering with Respect Jamaica.

"A major part of the Youth Ambassador programme is giving young people more confidence in doing community-based initiatives," she said.

"My role as a youth ambassador is to empower them, giving young people the tools and level of confidence to know they have a voice. There are a lot of young people who are passionate about standing up against injustice and stereotypes."

According to Edwards, she is looking forward to providing open dialogue for youth and resources for action through a variety of Respect Jamaica activities and speaking engagements with corporate partners.

Respect Jamaica is an anti-discrimination campaign that encourages the inclusion of all people regardless of race, religion, class, sexual orientation, age, political affiliation, and/or special needs as deserving of respect.

Launched in 2014, the Respect Jamaica campaign has 30 corporate sponsors.