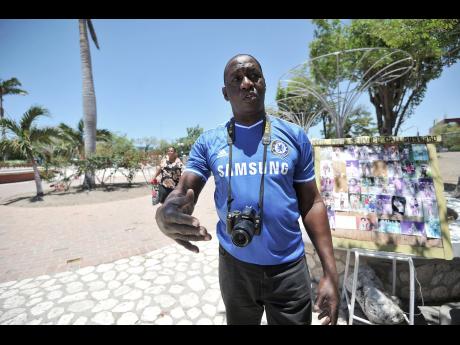 Norman Grindley
Neil Connery has watched his business dwindle over the years. 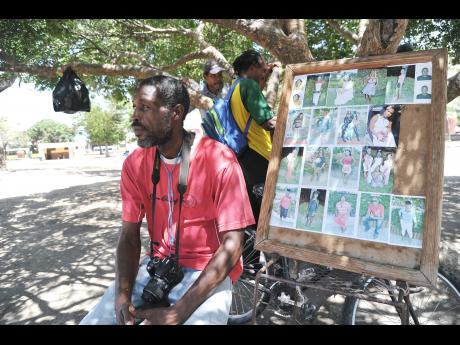 Norman Grindley
Wayne Russell, who has been working in the park for some 20 years, waits for the odd customer.
1
2

While the advance in technology has given Jamaicans the chance to capture their every special moment on their cellular phones or other personal devices, this development is proving a challenge to the persons who make their living taking pictures in the St William Grant Park in downtown Kingston.

This has been compounded by new park rules that have left these photographers, who have been there for decades, desperately trying to earn a living.

According to the photographers, rules such as the closure of the park at 8:00 p.m., the early closure of its eastern and western gates, and the prohibition of holiday backdrops inside the park, are turning away the few customers who still support them.

"The smartphones affect me too, but not much. My problem is the restrictions that them have for us in the park. Them lock up the two main gate them so my customers who use to come look for me, can't find me now," said Lionel Grant, who, at 73, has been taking photographs inside the park for some 40 years.

Veteran among the bunch

Grant, who is one of the oldest among at least a dozen photographers operating in the park, recalls when the recreational spot was "pure dirt", and when buses from all over the Corporate Area would terminate there, letting off droves of passengers eager to smile for his camera.

At that time, electricity was provided inside the area and photographers, unlike now, could leave their display boards anywhere in the park without hassle.

Now, he no longer has the freedom of charging his cellular phone inside the park, nor is he able to set up backdrops during special holidays like Valentines Day or Christmas. And, according to Grant, these backdrops are vital attractions for children and adults alike.

"Some people complain about the technology, but it don't really bother me. The restrictions that them have in the park is more of a problem," said Grant.

Most of the photographers who started out with Grant have either died out or migrated, leaving others like Wayne Russell, who has been working in the park for some 20 years.

According to Russell, some photographers have been forced to look for work outside the park, grabbing at the opportunities available at Emancipation Park, graduations, and at passport and tax offices in the Corporate Area.

He said others flock cemeteries - where a steady flow of funerals provide them with a stream of clients.

"Most people use this park as a headquarters because nothing not going on in here like one time. We just use right here as a cool-out spot to play we likkle domino and them thing there," said Russell.

"Holiday time and on Sundays we not here. We only stay here because more time people pass and will give us some work."

Russell said the proliferation of smartphones has had a devastating effect on his business as only a few people are now willing to pay to have their photographs taken.

"It (work) cut down, it cut down bad. A mostly passport-size picture we get to take now because true dem can't do that on them phone. But no full-body pictures," said Russell.

He said one full-body photograph costs $250, while a passport-size photo is done for $300 or more, dependent on the number of copies.

"Still persons are 'bawling' down the prices," laughed Russell.

"This is from roll film days; from that time till now, the price don't move. Some people, like when we go to some graduation, will use we because them have them phone but them memory full up or dem battery dead. That is how we get a little work there."

According to Russell, some photographers have tried to stay relevant by broadcasting their work via social media, but he has not gone that route.

Neil Connery, another photographer operating in the park for more than 20 years, offered a similar story. He added that the park has deteriorated over the years and, as a result, many customers who would travel to the recreational spot to take photographs have been turned off.

In addition, rules, like the prohibition of necking by couples in the park, is hurting the industry, he said.

For fellow photographer Percival Adams, making a living by taking pictures in the park is a thing of the past.

"Any work comes is just so, but I don't sit here and wait on work. I do funerals on Sundays and so on. We come here because it better than to sit at home and do nothing," said Adams. "Right now is a woman I am waiting on to come collect some graduation pictures that I took for her. From morning I am waiting and she don't come yet," added Adams.