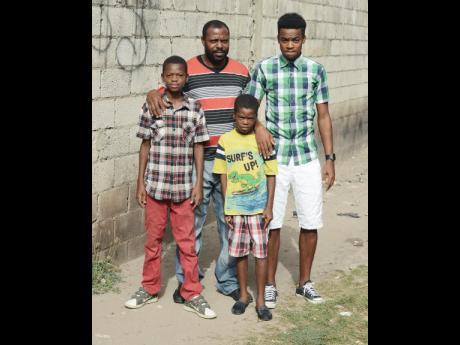 Ian Allen
Dane Kelly (centre) and his boys, (from left) JeVaughn, DeVaughn and Vaughn in the June 2015 photo.

Dane Kelly, who has vowed that he will not be like his dad and abandon his children, will find it a bit easier to send his three boys back to school after a Good Samaritan came to the assistance of the family recently.

Kelly, a single father living in the tough West Central St Andrew community of Olympic Gardens, was highlighted in The Sunday Gleaner in June, as neighbours praised him for being a parent to his three sons by himself for the last nine years, after their mother moved out.

Having grown up without his father, Kelly has been going all out to provide for his children, ages 18, 12 and eight.

To ensure there is food on the table and the boys remain in school, Kelly has done whatever is necessary, including working two jobs.

"A father is supposed to stand by his children no matter what," the 43-year-old Kelly told our news team in June.

"Children grow up better with father and mother, but sometimes things happen, but no matter what, fathers fi take care of their children.

"It is hard sometimes, but I have to do the best I can to make the boys comfortable. Sometimes, I don't eat at all to make them eat."

But as the new school year begins, Kelly has been given a hand up by an overseas Gleaner reader who has sent bags, tablets, cellular phones and shoes for all three boys.

"I feel pleased that somebody reached out a hand to me, because it is so stressful," said Kelly.

"It really helped me, because the boys wanted a tablet and somebody reached out and bought it for them and make the kids feel alright."

Kelly said his boys have been extremely thrilled with the gifts and he is really thankful for the assistance.

"I give thanks and praise, as it has really made the kids feel alright. One of the boys wasn't here, he was by his granny (grandmother) and when he heard that the things came he said him 'a leave granny and come now'.

"So, for somebody from foreign just read the story and reached out and helped, I really feel good about that."

Kelly's eldest son, Vaughn, will be going into sixth form, having successfully sat five CXC subjects, while the other two are in primary school.

"A little pressure come off mi, because I was wondering how I was going to manage because everything gone up. The big one (Vaughn) school fee gone up to $41,000 and I have to get that paid by September," said Kelly.

"But I will take my time and sort it out, as I always do."