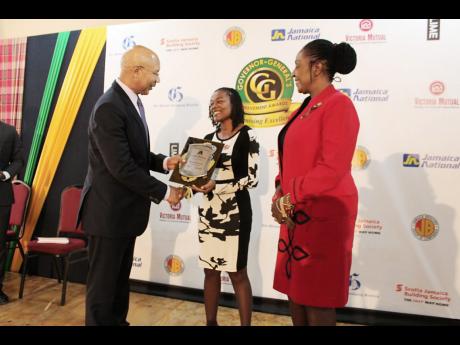 Desrene Denton, one of the recent awardees, for the Governor General's Achievement Award for Excellence in the field of voluntarism has said she is humbled and honoured to be recognised for her work.

"I had no idea that what I do was being noticed by anyone until I was nominated for this award. This recognition also pushes me to continue what I have started so I can impact my community," Denton said following the event held at the Wembley Centre of Excellence in Hayes, Clarendon.

Her life is all about service to her community in St Ann where she provides breakfast for the homeless and is also the founder of a multifaceted group called IMPAC Ministries.

Members of the group minister through singing, sign language, drama, a homework assistance and welfare programmes.

As if that were not enough, Denton said she also has a food basket programme where grocery is provided to the less fortunate monthly.

Denton said she remains motivated in service to her community because her work provides a feeling of belonging to others who she would pass daily.

"The delight that these people express and their gratefulness at getting, not necessarily clothing and meals, but having someone to sit and talk with them, offer a hug and a word of prayer, is motivation," she said.

For her, voluntarism does not take much more than love for your fellow men.

According to Denton, her service has a certain empathy to it, as at one point in her life she herself was also homeless and during that time she needed someone to encourage her and make her feel human.

It is for this reason she is now reaching out to others to be a part of the process.

"You may not think that you can make a difference, but change takes place gradually. We are here to serve humanity with humility. Volunteer your time, talent, services. You'd be surprised at how fulfilling it can be," she said.

Hailing from White Hall district in West Rural St Andrew, she is a past student of Oberlin and Merl Grove High schools.