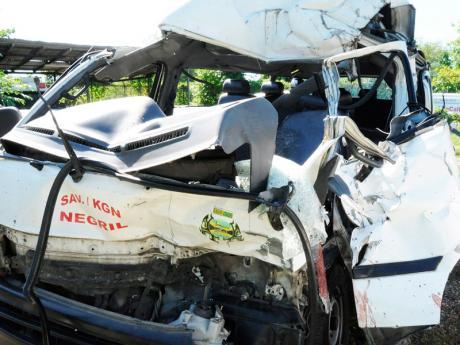 File Photo
The National Road Safety Council (NRSC) reports that up to this morning 267 persons have died in 247 fatal collisions this year.

With Jamaica already failing to keep road deaths below the target of 240, there are concerns that the number of persons killed on the nation’s roadways this year could again surpass 300.

The National Road Safety Council (NRSC) reports that up to this morning 267 persons have died in 247 fatal collisions this year.

Both figures represent a eight per cent increases when compared with the 248 persons who died in 228 fatal crashes for the corresponding period last year.

In March 2013 the NRSC launched a campaign under the theme ‘Jamaica Can Do It’, which was aimed at bringing road fatalities below 240 annually.

Since the launch of that initiative Jamaica recorded 307 road deaths in 2013 and 331 last year.

With today marking the start of the final quarter of this year, Vice-Chairman of the NRSC, Dr Lucien Jones, acknowledged that keeping road deaths under 300 will also be a challenge.

He pointed out that historically this period has been associated with many road fatalities, especially over the holiday period.

According to statistics compiled by the NRSC, March saw the highest number of road fatalities with 38 followed by August 36 and April with 32.

The 23 road deaths recorded last year is the lowest for any one month period this year.