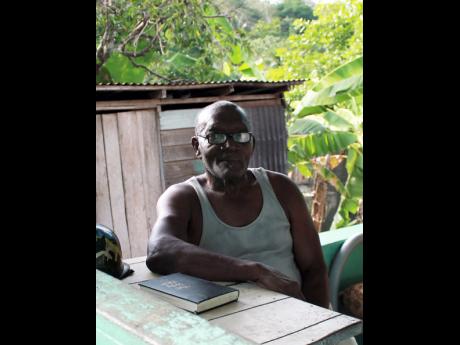 Orantes Moore
Pastor Oswald McCormack of Coffee Piece in Highgate, St Mary, has been a minister for more than 50 years

Pastor Oswald McCormack of Coffee Piece in Highgate, St Mary, has been a minister for more than 50 years. He is the assistant overseer of a popular religious organisation comprising six churches throughout St Mary and the neighbouring parish of St Ann, the Emmanuel Faith Church of God.

As McCormack prepares to celebrate his 83rd birthday later this month, the pensive and good-natured pastor has considered mankind's contemporary moral standing and concludes that the future looks bleak for his beloved countrymen.

He told Family and Religion: "I think the biggest issue affecting St Mary and Jamaica generally, right now, is the fulfilment of the word of God.

"The things that are going on around us will have to be and come to pass, no matter how much we try to avoid them because the word of God (Matthew 5:18) tells us: 'Till heaven and earth pass, one jot or one tittle shall in no wise pass from the law,' and that means until nations obey and become conscious of God's word, nothing will change.

"We sometimes blame things on the Government and, in truth, they are to be blamed for certain things, but generally, man's obedience to God is the greatest problem we have across the nation.

"[Jesus] said the last days would be perilous, and you can't imagine a time with more peril than we are seeing now. I'm almost 83 years old and I have never heard of so much murder, rapes and behaviour that is unbecoming to mankind. All these things show and tell me that we are closer to the end of time."

Sadly, McCormack is pessimistic that mankind will turn away from wrongdoing and believes we should expect an increase in crime and violence in the coming years.

He explained: "I doubt that we'll ever get to a level of consciousness because I am guided by the word of God, which says the closer we get to the end of time, the worse things are going to become, and that's in Jamaica and across the world, because men are going to become more wicked.

"A couple of months ago, I told my overseer that Jesus Christ was here, as we learned from His word; and with all the good He did, He wasn't able to get everything He wanted, and we're not going to be able to get it either."

Nevertheless, while McCormack acknowledges that destructive and negative deeds are becoming increasingly prevalent, the pastor insists that religious leaders must continue to work hard and highlight the benefits of Christianity.

He said: "We must try to transform man's heart and mind. [Romans 12:2] says: '... be transformed by the renewing of your mind', and I think that's important because the mind can be a dirty place sometimes, and it can only be cleaned through Jesus Christ.

"Once the mind and heart have been transformed, you'll start to see changes. But as it is now, man's '... heart is the most deceitful of all things and desperately wicked (Jeremiah 17:9)'. Mankind loves evil more than good; and this is affecting not just St Mary but the entire nation and the whole world."