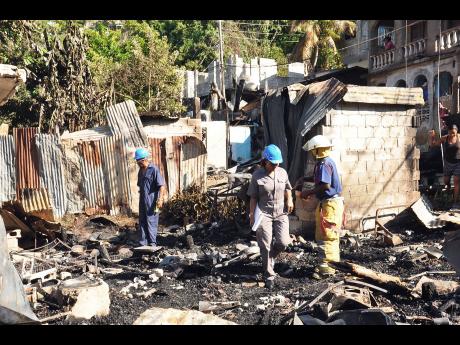 Contributed
Fire personnel were busy going through the rubble to determine what caused the fire in Cantebury, St James, on Monday morning.

As the victims of Monday's devastating early morning fire in the Canterbury community in Montego Bay, St James, continue to ponder ways of putting their lives back together, their local political representative, councillor Suzette Brown, is taking urgent steps to assist them.

"We have a partnership network with members of the business community through which we solicit help in situations like these and that network has been activated," said Brown, in outlining her plans to assist the 12 persons, who were left homeless in the aftermath of the fire which destroyed 12 board houses.

"I have visited the community and I have seen the devastation," continued Brown. "It is just a very sad way for the affected residents to start the new year .... we will be trying our best to help them to put their lives back together."

In addition to the help on offer from their councillor, the fire victims are reportedly getting help from the St James Parish Council and persons on the political campaign trail.

"Officers from the parish council's Planning and Disaster Relief Department have visited the community and have been providing assistance," said Brown.

According to Brown, the fact that the community is a close-knit one has helped to cushion the blow, as the affected persons have been taken in by relatives, albeit on a temporary basis.

Canterbury and nearby inner-city communities have had numerous fires in recent years. That is part of the reason councillor Brown has established the partnership network to deal with emergencies.

"I believe I can safely say that my division has had more fires than other divisions in St James in recent years ... a lot of our funding goes into assisting persons affected by fires," said Brown.